Osaka to ease business limits despite state of emergency 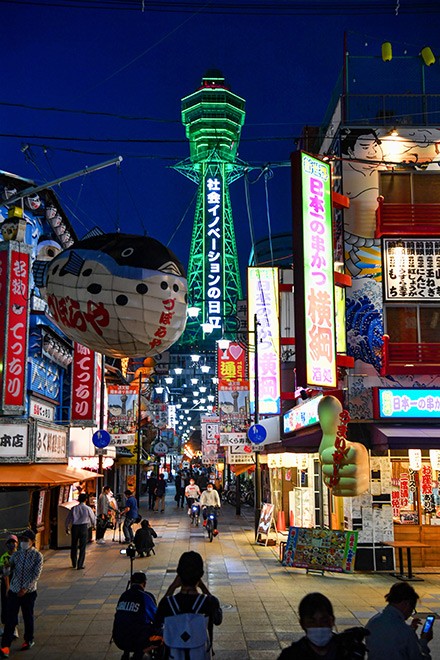 Tsutenkaku Tower in Osaka is illuminated in green on May 14, indicating the prefecture had met numerical targets regarding COVID-19 infections over the past week. (Tatsuo Kanai)

Osaka Governor Hirofumi Yoshimura on May 14 decided to gradually lift his requests for businesses to shut down or shorten operating hours, even though the prefecture remains under the national state of emergency.

Yoshimura announced his plans about two hours after Prime Minister Shinzo Abe lifted the state of emergency regarding the novel coronavirus pandemic for 39 prefectures
Osaka Prefecture was not on that list.

At a meeting of his prefectural government’s task force handling the coronavirus outbreak, Yoshimura decided to partially lift the business restrictions from midnight May 15 based on three numerical targets concerning COVID-19 infections.

Speaking with reporters on May 14, Yoshimura said that asking residents to stay home and businesses to remain closed might help cut new COVID-19 infections to zero, but those measures would have a devastating effect on the local economy.

“Lives will be lost if we do not allow society and the economy to resume activities,” Yoshimura said. “We cannot completely stop the economy.”

The prefectural government’s numerical targets, referred to as the Osaka model, were announced by the governor on May 5.

Yoshimura said if the goals are met over the course of seven consecutive days, the business restrictions would be lifted.

The three targets are: fewer than 10 individuals a day on average whose infection routes for the coronavirus are unknown; the average ratio of positive tests for the novel coronavirus is under 7 percent; and an occupancy rate of less than 60 percent for hospital beds set aside for those with serious symptoms of COVID-19.

Osaka officials explained on May 14 that all three targets had been met for the week from May 8, with a daily average of 2.86 people whose infection route could not be traced; an average positive test rate of 1.6 percent; and 22.9 percent of hospital beds filled with patients with serious symptoms.

However, the Osaka model is different from the central government’s standards for lifting the state of emergency.

Osaka, Tokyo and six other prefectures with or near large urban centers remain designated by the central government as requiring special precautions to prevent a surge in new infections. These areas will remain under the state of emergency until May 31.

The revised special measures law that allowed Abe to declare the state of emergency for the novel coronavirus gave prefectural governors the authority to ask local residents and businesses to take certain actions to reduce the risk of infections.

But in revising the guidelines for how the measures should be implemented, the central government said it would have to be involved in discussions before prefectural governors decided which businesses should shut down or reduce operating hours.

In discussions with Osaka officials, the central government rejected the prefecture’s proposal to allow pachinko parlors to resume operations.

After further talks, a compromise was reached, allowing pachinko parlors to reopen only if they had a floor space of under 1,000 square meters.

Osaka’s decision does not mean that all businesses can return to normal.

For example, restaurants will be allowed to extend business hours for two hours until 10 p.m. And drinking establishments can stay open for two more hours until 9 p.m.

In addition, Yoshimura could face a backlash if the lifting of business restrictions causes a surge in new COVID-19 infections in his prefecture.

Although the three targets in the Osaka model can be easily understood by the public, experts have cast doubt on whether the goals were based on sufficient scientific evidence that they would prevent a further spread of infections.

One of those skeptics is Kazunori Tomono, a professor at Osaka University who specializes in controlling infectious diseases.

Tomono also chairs the Osaka prefectural government’s own panel of experts on the coronavirus outbreak.