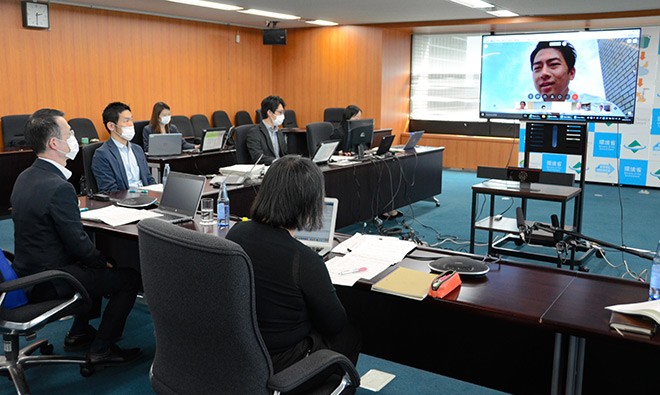 Environment Minister Shinjiro Koizumi addresses an expert panel on coal-fired power at a meeting held via videoconferencing due to the novel coronavirus pandemic on May 14. (Mutsumi Mitobe)

Critics of Japan’s export of coal-fired power plants got a major boost on May 14 as a government panel urged the country to help nations it sells plants to later transition to a decarbonized society.

The Environment Ministry panel's report, compiled that day, also addressed the falling demand for energy since the start of the coronavirus pandemic, noting the drop provides a great opportunity for Japan to shift to clean energy while it pursues economic recovery. It calls the outlook for coal “the most uncertain” among energy sources.

Japan has done a brisk business exporting the plants that emit massive amounts of carbon dioxide, mainly to Asian nations. But as the cost of renewable energy falls, countries are upping the percentage of renewable energy in their electricity planning, lowering demand for coal-fired plants.

Responding to the global backlash against Japan’s export of coal-fired plants, cited as a major cause of global warming, the panel called on the government to change its current energy strategy into one that helps buyers of plants formulate energy policies, including long-term decarbonization strategies.

The ministry will include the proposal in its review of Japan’s strategy of exporting infrastructure, including coal-fired plants, after coordinating with related government ministries and agencies.

The panel said government funding currently aimed at encouraging the export of infrastructure should be used to offer solutions for decarbonization. The panel also said the impact of exporting coal-fired plants on the local environment and communities in nations buying them needs to be considered.

The ministry set up the panel in April to sort out facts that will be a basis for discussions on reviewing conditions for providing government funding for the export of coal-fired plants.

Japan is unlikely to export newly built coal-fired power plants any time soon since its three megabanks have announced they will stop investing in the plants and lending to them, in principle.

But one panel member stressed the importance of starting a review of the conditions under which Japan provides the funding for the sales.

“Even if there are no projects planned for the future, it’s important to make it clear what kind of policy Japan will take in supporting developing countries,” said Yukari Takamura, the panel chair and a professor of international law at the University of Tokyo.