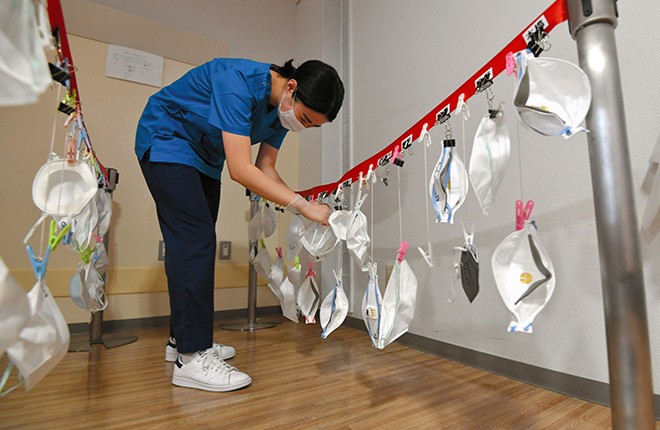 A hospital worker cleans and dries face masks for reuse because of a shortage. (Asahi Shimbun file photo)

Workers' compensation was approved for the first time for two individuals who became infected with COVID-19 in the course of their work. One of them is a medical care professional.

In announcing the decision May 15, health minister Katsunobu Kato also revealed that 39 individuals had submitted applications for workers’ comp as of the day before after testing positive for the new coronavirus as a result of their employment.

Those whose applications are approved will have their medical expenses to treat COVID-19 covered by the workers’ compensation insurance program.

This also entitles them to receive 80 percent of their basic salary for a certain period if they are forced to take time off work for treatment.

Normally in cases where a person becomes infected by a virus, emphasis is placed on tracing the infection route before a decision is made on eligibility for workers' compensation.

But health ministry officials said that, in principle, medical care professionals at high risk of becoming infected would have workers’ compensation approved except when the route of infection was not connected to their work.

Kato also revealed that he has called on hospitals to expeditiously submit workers’ compensation applications whenever their medical care professionals test positive for COVID-19.

Health ministry officials may also more flexibly approve workers’ compensation for those who regularly come in contact with the public, such as cashiers at supermarkets.

In spite of Kato’s request for applications to be submitted swiftly, some medical care professionals revealed that not all medical institutions are aggressively ensuring that staff receive workers’ compensation.

On May 15, a nurse who worked at a hospital where a cluster infection of COVID-19 had arisen submitted an application for workers’ compensation with a comment that the atmosphere of her workplace was one of “Don’t make a major fuss.” The woman said she had difficulty finding anyone she could consult with at the facility.

The nurse ended up conferring with Hiroshi Kawahito, a lawyer who handles labor cases, including workers’ compensation and “karoshi,” or death from overwork.

According to Kawahito and others, the nurse worked at a Tokyo hospital where about 100 members of staff and patients became infected with COVID-19, and at least 10 patients died from the disease.

In the department where the nurse worked, each nurse had to care for 16 infected patients. While the hospital provided face shields and special face masks, staff were instructed to share the protective gear with colleagues.

She tested positive after taking the polymerase chain reaction test in late April. She has been hospitalized since early May because her symptoms worsened, but her hospital had not offered any guidance on the issue of workers’ compensation.

(This article was written by Suguru Takizawa and Sawa Okabayashi.)