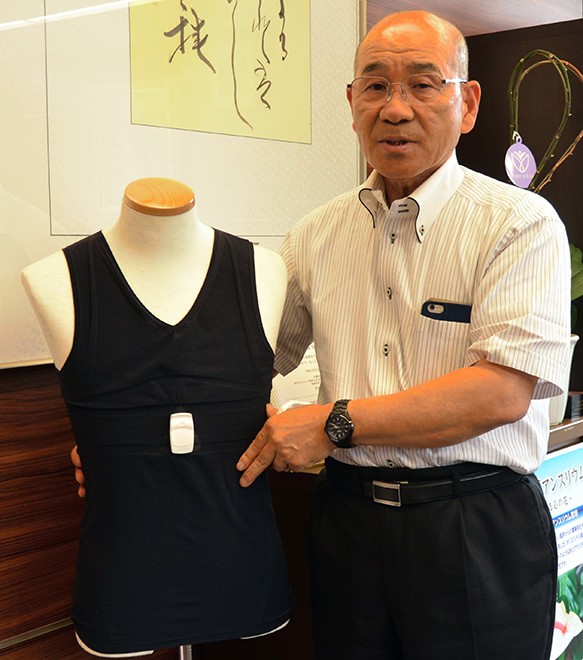 KAWAMATA, Fukushima Prefecture--A “smart” undershirt expected to remotely monitor the health of elderly residents here could prove a perfect fit for checking on the condition of new coronavirus patients in Kyoto Prefecture.

The Kyoto prefectural government is adopting the technology that looks after residents in an increasingly depopulated town to reduce infection risks for medical workers who take care of patients with mild symptoms admitted to hospitals.

The undershirt is produced by Mitsufuji Corp., which has a factory in Kawamata, a town impacted by the accident at the Fukushima No. 1 nuclear power plant triggered by the March 2011 Great East Japan Earthquake and tsunami.

The prefectural authorities introduced 50 units of the biometric smartwear in May.

“It allows nurses and other medical workers who must work with limited staff resources to monitor changes in patients’ health without coming into contact with them,” an official said.

Thanks to electricity-conducting silver-plated threads interwoven near the heart, the smartwear can measure heart rates, breathing rates and other readings and send the data to smartphones and tablets from a rechargeable transmitter attached to the undershirt.

Along with body temperatures and other information entered by patients, the data will be managed collectively by personal computers.

Mitsufuji, a textile maker originally founded as a factory for producing Nishijin-ori textiles for “obi” sashes in Kyoto Prefecture, produces the undershirt at its factories in Kawamata and elsewhere to monitor the health of construction workers and nursery school children.

Kawamata, which has been famed for its production of silk fabrics since the Edo Period (1603-1867), is located within a 30- to 50-kilometer radius from Tokyo Electric Power Co.’s Fukushima No. 1 nuclear power plant.

Although the evacuation order for some areas was lifted three years ago, it has been a major challenge to provide health care and look after elderly residents in the rapidly aging community because younger generations have not returned home.

Town officials had their eye on the smartwear produced by Mitsufuji, which opened its factory in Kawamata after the Fukushima nuclear disaster.

The town has collaborated with Mitsufuji in a demonstration experiment with local residents since January 2019, using the smartwear to measure heart rates and stress values during farm work and see if the data can be used to monitor their health.

Improvements have been made for senior citizens not accustomed to using smartphones on which the data are displayed, including making the devices easier to use and enlarging the data shown on the screen.

“Our efforts of ‘remotely looking after’ residents in the town faced with a declining population and an aging society are needed to deal with the coronavirus pandemic,” said Mayor Kanemasa Sato, 71, who also participated in the experiment. “I’m glad that the technology cultivated in the disaster-affected area is spreading to another area.”