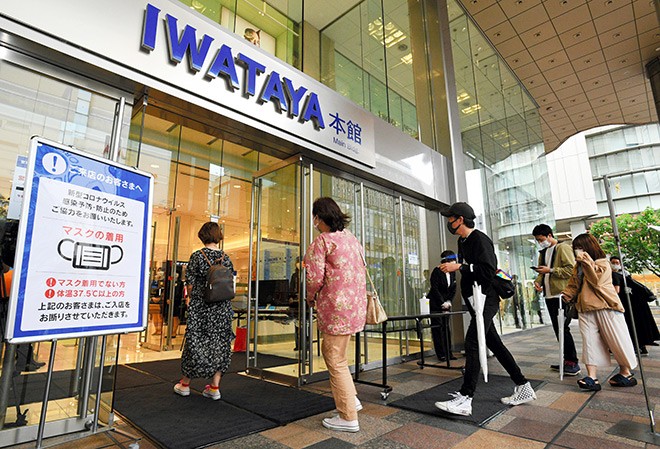 Shoppers waiting for the reopening of Iwataya Department Store in Fukuoka on the morning of May 16. (Motoki Nagasawa)

Sayaka Murashima was among the 20 or so shoppers lined up in the drizzle to wait for the reopening of Iwataya Department Store in central Fukuoka on May 16.

She came to buy clothes and cosmetics as department stores and shops in urban centers reopened this weekend after weeks of closure following the state of emergency amid the new coronavirus outbreak being lifted in 39 prefectures, including Fukuoka Prefecture.

“I have waited so much for this day,” said Murashima, 25, a company employee from Ogori in the prefecture. “I am very glad it finally came.”

She said she will take precautions including not touching the handrails or merchandise inside the store and disinfecting her hands as soon as she returns home.

The department store will not allow customers whose temperature tops 37.5 degrees or not wearing a mask to enter.

“Ensuring the safety of our customers is a top priority,” a department store official said.

In Tokyo, which remains under the state of emergency declared last month, shoppers to Tamagawa Takashimaya Shopping Center in Setagaya Ward were welcomed by employees wearing face guards. The employees also screened customers using thermography and encouraged them to sanitize their hands with disinfectants placed at the entrance of the complex.

Sections selling clothing and daily items reopened on May 14 as they were not the target of closure requested by the Tokyo metropolitan government.

But a crowd was about 60 percent smaller on May 16, compared with the days before the state of emergency was declared on April 7.

Still, the reopening was good news to customers.

“I feel great this weekend for the first time in a long while as it seems society is moving in a good direction,” said Ikuko Kitamura, a 53-year-old woman from Shinagawa Ward who visited the shopping center with a friend.

While many shoppers were happy with the reopenings, crowds, still wary of contracting the virus, have yet to return to sightseeing places in local regions in large numbers.

In Ibaraki Prefecture, where the state of emergency was lifted on May 14, a sign put up in front of the beach in Oarai called on visitors to refrain from entering.

Oarai is a town popular as a site for surfing and shellfish gathering, but there were only a few people on the beach.

A man who was collecting seashells with his 3-year-old daughter said they came from Tochigi Prefecture, where the state of emergency was also lifted.

“I took my child out following the lifting as she had to stay home all the time as her day care school remained closed,” he said.

Although Miyagi Prefecture has also reopened, most of the shops catering to tourists remain closed in Matsushima, a town renowned for its bay dotted with many pine-covered islets, now attracting only a small number of visitors.

Among them was Hisashi Ouchi, a 42-year-old company employee from the prefectural capital of Sendai, who traveled there with four other family members.

“It really is refreshing to see the sea,” he said. “I have worked from home for about a month and all my children did during that period was play video games.”

At Minami-Chita Beach Land in Mihama, Aichi Prefecture, staff workers made sure that all visitors were wearing face masks when the facility reopened on May 16.

Some of the events were canceled as part of precautionary measures. When a dolphin or sea lion show was held, audience members were asked to keep a safe distance from each other.