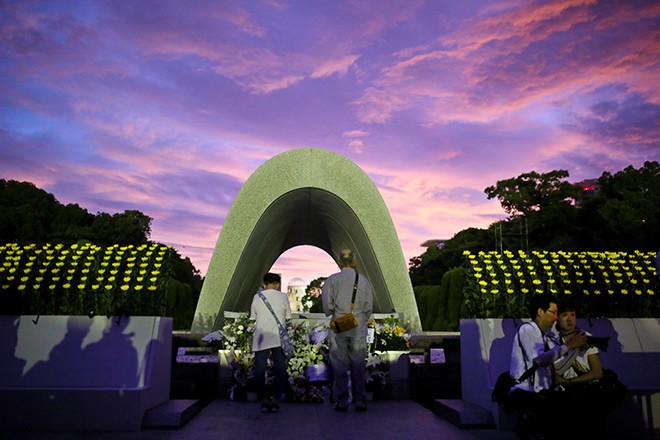 This summer, Hiroshima and Nagasaki will commemorate the 75th anniversary of the atomic bombings under highly unusual circumstances.

The cities and survivors of the nuclear devastation in 1945 were working to attract international attention to the anniversary in the campaign against nuclear weapons when the world got caught up in the new coronavirus pandemic.

The Hiroshima Peace Memorial Museum, which features materials and documents related to the Aug. 6 atomic bombing, has been closed since the end of February. The number of visitors to the museum in the fiscal year through March surpassed 1.75 million by that time, setting a new record. The Nagasaki Atomic Bomb Museum is also closed for the time being.

Most of the planned school excursion programs and other educational events featuring related monuments such as the Atomic Bomb Dome, or the Hiroshima Peace Memorial, and the Nagasaki Peace Statue have been canceled or postponed. It remains to be seen whether the annual peace memorial ceremonies in the two cities will be held as usual in August.

Despite the current virus crisis, however, various attempts are under way to keep up efforts to spread the messages from Hiroshima and Nagasaki.

The entire Japanese society should support these new undertakings to continue pushing the world toward a future free from nuclear arms.

In March, the Japan Confederation of A- and H-Bomb Sufferers Organizations and groups supporting survivors of the nuclear attacks, or hibakusha, launched a video conferencing program featuring A-bomb victims speaking about their experiences.

Young supporters have helped create the new online program, which uses a teleconferencing system for personal computers and smartphones.

In the first installment of the program, Jiro Hamasumi, 74, who was exposed to radiation from the bomb dropped on Hiroshima in his mother's womb, spoke about how he has suffered from the fact that he became a hibakusha before he was born.

High school and university students across the nation who were staying at home took part in the program and watched Hamasumi speak about his suffering and asked him questions. The program has been touted as a new way for hibakusha to pass their experiences to future generations.

This year also marks the 50th anniversary of the Nuclear Nonproliferation Treaty's (NPT) entry into force. The confederation planned to send 30 hibakusha including Hamasumi to a conference to mark the occasion that was to be held this spring at the United Nations headquarters in New York.

But the event has been postponed to next year due to the pandemic.

The average age of hibakusha is now over 82. Some people lament that the precious opportunity for them to communicate their messages to an international audience has been delayed. But it should not be forgotten that the value of hibakusha's first-hand testimonies of the nuclear destruction is now widely and deeply recognized around the world.

The Treaty on the Prohibition of Nuclear Weapons, the first legally binding international agreement to comprehensively prohibit nuclear weapons, was adopted three years ago at the U.N. General Assembly.

Years of efforts by hibakusha to promote the cause of banning nuclear arms were a key driving force for the adoption of the landmark treaty and the international movement behind it.

The process of governments, citizen groups, experts and people from all over the world rising to the cause in unity with hibakusha through information technology indicates that the internet will continue serving as a vital communications tool for expanding the reach of the movement.

Some 1,000 people from many countries took part in the annual world conference against nuclear weapons, which was held online in April, and listened to stories about what occurred 75 years ago in Hiroshima and Nagasaki as recounted by hibakusha.

Izumi Nakamitsu, United Nations Under-Secretary-General and High Representative for  Disarmament Affairs, lauded the conference as a "force that can move people's hearts."

Peace Boat, an international nongovernmental organization for world peace, also organized an online event to discuss the issue of nuclear disarmament to compensate for the postponed NPT conference. Some 600 participants, mainly young people, discussed what they could do to contribute to the cause.

There is no postponement for calls for the elimination of nuclear arms. If the Japanese government really shares the goal of "a world without nuclear weapons," it should provide active support for hibakusha's activities to communicate their messages to the world and stop turning its back on the nuclear weapons ban treaty.