New virus cases plunge in Japan: none in Osaka, 5 in Tokyo 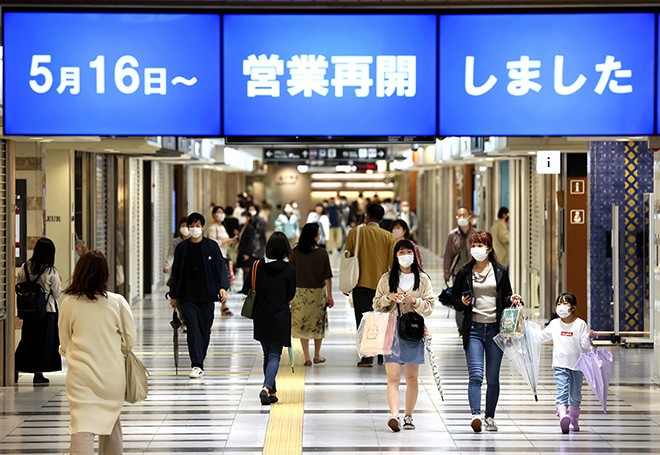 People wearing protective masks shop at the underground mall Porta in Kyoto on May 16, where some stores remain closed. (Jin Nishioka)

Osaka Prefecture on May 17 reported no new novel coronavirus infections for the first time since March 9, as two other special alert prefectures Chiba and Kyoto also reported no new cases.

In addition to the capital, fresh cases confined to single digits were confirmed in Hokkaido and eight prefectures.

The five new Kanagawa cases were people associated with hospitals in Yokohama.

Patients who tested positive again after they had recovered from the virus and tested negative were confirmed in Hokkaido, and Saitama, Hiroshima, Fukuoka and Okinawa prefectures.

In Okinawa, a female company employee in her 60s tested positive again. She was first confirmed with the virus on April 12 and discharged from a hospital on May 1 after recovering and testing negative twice.

But later she experienced virus symptoms including a strange feeling in her throat and a slight fever and underwent the test again on May 13, which showed she had the virus.