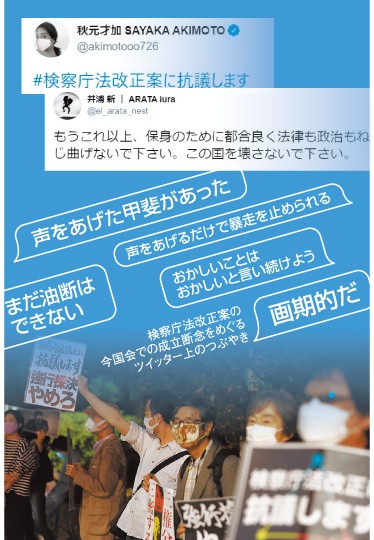 Some Twitter posts praise the decision to shelve the bill to revise the Public Prosecutors Office Law, while others promise to fight on. (Graphic by The Asahi Shimbun)

U.S. pop megastar Taylor Swift was in her late 20s when she felt compelled to make a political statement on social media for the first time in her life.

The 2018 midterm elections were coming up, and Swift was appalled and terrified that a Republican candidate for the Senate in her home state of Tennessee backed policies that would undermine the rights of women and sexual minorities.

Swift defied her father’s warning and urged her Instagram followers not to support the candidate.

Her inner conflict and courage to speak out politically are chronicled in “Miss Americana,” a documentary film released this year.

“It’s time to take the masking tape off my mouth, like, forever,” Swift declares.

Seeing this film, I was surprised to be reminded that even in the United States, it takes tremendous fortitude for celebrities of her caliber to publicly discuss politics.

In Japan, Twitter has been abuzz with posts hashtagged, “I protest the proposed revision of the Public Prosecutors Office Law.”

Big-name actors and singers have jumped on the bandwagon, determined to stop the amendment that many believe is being forced through while the nation remains preoccupied with the COVID-19 pandemic.

Actress Kyoko Koizumi tweeted to the effect that she “studied the issue” as soon as the ruling coalition started Diet deliberations on the bill despite protests from the opposition camp, and that she was “closely watching the deliberations live on TV.”

On the day Koizumi read an opposing opinion submitted by retired top prosecutors, she tweeted, “I cried. And I felt resolved anew to fight.”

But there also was a popular singer who tweeted her protest, only to delete it when she came under relentless attack.

One person told her off by saying, “If you’re going to dabble in politics, you’d better study first.” Another said, “Your job is to sing. We don’t need you for anything else.”

Such comments represent the dark side of the era of social media.

The government and the ruling coalition on May 18 gave up on passing the bill during the current Diet session.

It appears that the groundswell of public protest grew powerful enough to stop the prime minister and his aides in their tracks, at least for the time being.

French President Charles de Gaulle (1890-1970) famously said, “Politics is too serious a matter to be left to the politicians.”

We, the people, can ignore the “masking tape” on our mouths and speak out freely about politics.