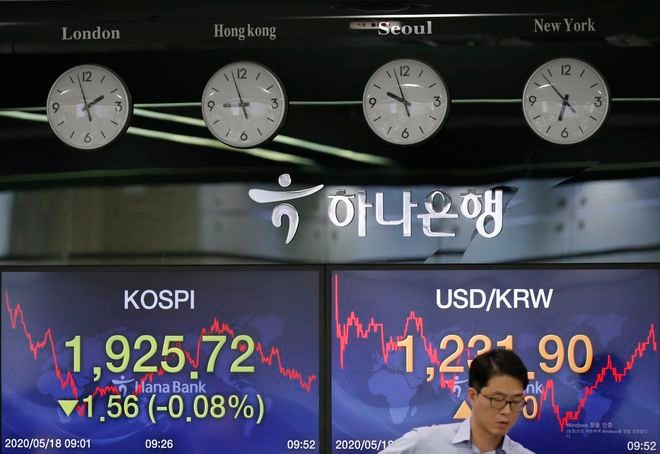 The dollar nursed losses against major currencies on Tuesday after encouraging results from the trial of a vaccine for COVID-19 improved sentiment in a boost to riskier assets.

The euro held onto hefty gains against the Swiss franc and the dollar following a proposal by France and Germany for a 500 billion euro ($543 billion or 59 trillion yen) recovery fund offering grants to regions hit hardest by the coronavirus crisis.

Currencies linked to commodities and other riskier assets were broadly supported thanks also to a sharp rebound in oil prices as investors’ focus turned to recovery from the pandemic.

“There has been a big improvement in risk sentiment because of hopes for a vaccine,” said Junichi Ishikawa, senior FX strategist at IG Securities in Tokyo.

“Volatility is falling for stocks and dollar-funding costs are lower. It’s easy for the dollar to fall and for other currencies to ride the dollar’s losses higher.”

Wall Street shares, emerging market assets and commodities all rallied after encouraging data from a COVID-19 vaccine trial by U.S. drugmaker Moderna added to the optimism as more governments scale back lockdown restrictions.

The euro bought $1.0911 in Asia on Tuesday, having gained 0.9 percent against the greenback in the previous session.

The common currency traded at 1.0604 Swiss franc after jumping on Monday to the highest in more than two months.

The euro’s rally overnight came after France and Germany proposed that the European Commission borrow money on behalf of the whole EU for the recovery fund. The news also sent Italian government bond yields skidding to their lowest in more than a month.

The proposed fund is mostly expected to benefit Italy and Spain, whose economies have been hit hard by the coronavirus pandemic but have weak public finances.

The euro’s sudden rise will face a test later on Tuesday with the release of the closely watched ZEW survey on German investor sentiment.

The pound also benefited from the dollar’s losses and rose to $1.2206.

While coronavirus infection rates in many places have now fallen to levels low enough to allow factories and businesses to reopen, some concern remains because the outbreak is not completely under control.

The novel coronavirus, which causes the COVID-19 illness, first emerged in China late last year and has paralyzed global economic activity as it spread across the world.

In the onshore market, the yuan was steady at 7.1069 per dollar. Investors in the pair remain wary due to simmering tension between the United States and China over trade policy and criticism of China’s early response to the coronavirus.

The yuan is likely track in a narrow range ahead of China’s annual parliament meeting due to open on Friday, which is expected to unveil economic stimulus plans.

Moreover, some economists are starting to question whether the People’s Bank of China should adopt quantitative easing to finance an expected surge in government bonds.

Elsewhere, the antipodean currencies stood tall against their U.S. counterpart, benefiting from the improvement in risk appetite and rising commodity prices.

The Australian dollar traded at $0.6527, close to a one-week high, after the release of minutes from the Reserve Bank of Australia’s most recent monetary policy meeting offered no surprises.

The New Zealand dollar stood at $0.6042. The kiwi rose briefly after Reserve Bank of New Zealand Deputy Governor Geoff Bascand told Reuters the central bank will re-evaluate its monetary easing in about three months to determine whether “to do more or take the foot off the pedal a little bit.”