Japan reasserts its claim to northern isles in policy document 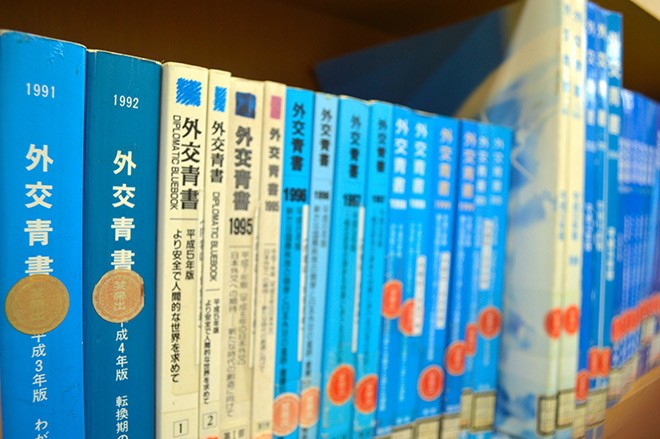 Back issues of the Diplomatic Bluebook line a shelf at the Foreign Ministry's library in Tokyo. (Naotaka Fujita)

Japan reasserted its claim to sovereignty over the disputed Northern Territories in its annual foreign policy Diplomatic Bluebook on May 19, after deleting mention of the issue last year in an attempt to appease Russia.

The 2019 version dropped all references to whether the four islands off the coast of the main northern island of Hokkaido belonged to Japan and only emphasized the importance of negotiating a peace treaty with Russia.

A peace treaty that would formally end hostilities dating to World War II is regarded as a crucial step in winning Russian agreement to return some or all of the islands seized by Soviet forces at the close of the war.

So in this year's version, the government reverted to its long-held position that Japan possesses sovereignty over the Northern Territories.

In the 2018 Diplomatic Bluebook, the Foreign Ministry stated “Japan's position is that the four Northern Islands belong to Japan” and that negotiations were continuing toward “concluding a peace treaty with Russia through the resolution of the issue of the attribution” of the Northern Territories.

But in a November meeting that year between Prime Minister Shinzo Abe and Russian President Vladimir Putin, the two leaders agreed to accelerate negotiations based on the 1956 Joint Declaration between Japan and the former Soviet Union which clearly stated that the Habomai islets and Shikotan would be handed over to Japan after a peace treaty was concluded.

As a result, the 2019 Diplomatic Bluebook erased all mention of sovereignty over the Northern Territories so as not to antagonize Russia.

But that led to criticism from conservative elements that Japan was sending a weaker message to Russia even as progress on the issue remained stalled in bilateral talks.

In the latest bluebook, wording has been restored to stress negotiations will be held to conclude a peace treaty by resolving the issue of attribution of the Northern Territories.

However, no clear wording is included that the Northern Territories belong to Japan, apparently so as not to ruffle Russia's feathers.

This year’s document continues the course toward North Korea laid out last year in which Japan's earlier call for applying maximum pressure was deleted in an attempt to kickstart negotiations for a summit meeting between Abe and North Korean leader Kim Jong Un.

In his opening Diet speech in January, Abe stated that South Korea was in fact Japan’s most important neighbor because it shared fundamental values and strategic interests.

But this year’s bluebook stated that the Takeshima islets are an inherent part of Japanese territory. South Korea, which calls the islands Dokdo, also claims sovereignty.

That led South Korea's Foreign Ministry on May 19 to issue a statement strongly criticizing what it called an inappropriate argument about sovereignty and asking for an immediate retraction.

(This article was written by Narumi Ota and Tatsuya Sato in Tokyo and Takuya Suzuki in Seoul.)