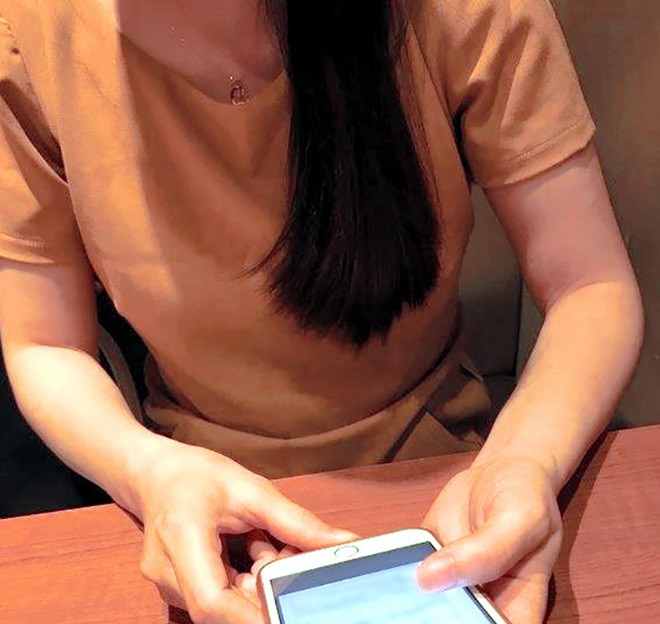 A woman who became jobless for three months shows records of communication with a job placement agency on her smartphone. (Makoto Oda)

A staffing agency hired by the Nagoya Regional Immigration Bureau is suspected of fabricating job contracts to obtain residence status for foreigners and gain more revenue for itself, The Asahi Shimbun has learned.

The bureau is investigating the allegations surrounding Free Style Co., a midsize staffing agency specializing in foreign workers, and its group company.

Free Style, based in Kanazawa, Ishikawa Prefecture, has performed official counter services for the bureau, a branch of the Immigration Services Agency of Japan, since July after putting in a winning bid.

Although the suspected wrongdoing does not involve counter services provided at the bureau, the allegations could erode public trust in immigration control work.

The company forged the employment contracts to make it easier for foreigners to be granted residence status and work in Japan as engineers or interpreters under the category of “Engineer/ Specialist in Humanities/ International Services,” according to former Free Style employees, other sources and documents obtained by The Asahi Shimbun.

The practice has continued since around 2017, they said.

To receive residence status under this category, the applicants or proxies must submit employment contracts and related documents to immigration authorities for a certificate of eligibility.

During that process, Free Style and the group company, which is based in Nagoya, produced two kinds of job contract papers: one for the foreigner seeking residence status and the other to be sent to immigration authorities.

Instead of the foreign applicants, Free Style employees or others signed some of the contract papers that were submitted to immigration authorities, the sources said.

The faked contracts contained employment periods that were different from the actual conditions, and some of the prospective employers named had yet to conclude the contracts with the foreigners, the sources said.

“The company was trying to increase its income through the dispatch of more foreign workers than its competitors by speeding up the immigration formalities,” the former official said.

A former employee with the affiliate told The Asahi Shimbun that “contracts were signed on the orders of an executive,” and that the staffing agency and the affiliate have fabricated “more than 100 documents over several years.”

The Asahi Shimbun obtained copies of the signatures in the passports of five foreigners and their employment contracts produced by them.

Ryo Yanagiya, a handwriting analyst with the Japan Association of Graphology, compared the signatures on the copies and concluded the contracts were probably forged.

“It is highly likely that all of the contract papers were signed by somebody else,” he said.

A woman from a Southeast Asian country received a shock after coming to Japan in the summer of 2018.

She was issued the status of residence arranged by the Free Style group company, which had also prepared documents that said she could start work soon in the Tokai region.

However, the prospective employer had, in fact, rejected her in an interview.

The woman remained unemployed for about three months before finally landing a job with help from an acquaintance.

“I managed to survive those three months since I could live with my sister who was studying in Japan,” she said.

The Immigration Services Agency has interviewed foreigners who entered Japan on papers suspected of being doctored by Free Style, sources said.

Shinobu Kongo, a representative director of Free Style, declined The Asahi Shimbun’s request for an interview.

The Nagoya Regional Immigration Bureau also declined to comment on the case.

“We will refrain from replying because it might infringe on the rights and interests of the company,” an immigration official said.

Foreigners with a good command of Japanese were in high demand before the novel coronavirus spread around Japan and hammered business sectors.

A record 1.66 million foreigners worked in Japan as of the end of October, according to the labor ministry.

(This article was written by Makoto Oda and Hiroyoshi Itabashi.)