VOX POPULI: Public parks, the ‘lungs of the city,’ are now stifling places 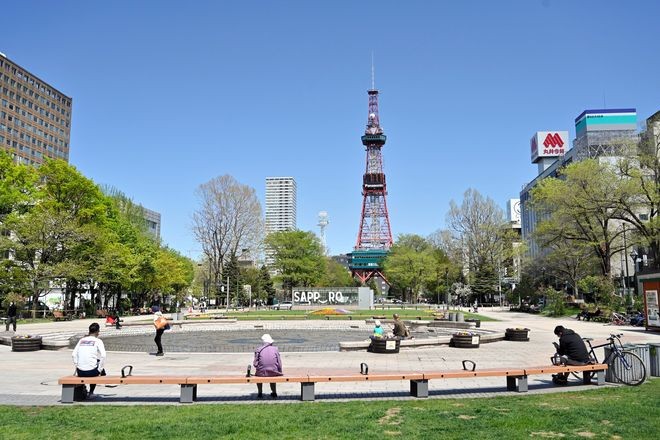 Only a few people are seen in Odori Koen park in central Sapporo on May 14 as the state of emergency is still in place to curb the spread of the new coronavirus. (The Asahi Shimbun)

The Asahi Shimbun's "Koe" (Voice) letters to the editor section recently ran a letter from a man who said he was stopped and questioned by a police officer while playing in a neighborhood park with his two children, aged 7 and 5.

The officer explained that someone called the police to report that people were "playing in the park, in defiance of the stay-at-home order."

This spring, parks around the nation have come to present scenes that are dramatically different from the past.

What purpose are parks meant to serve? Wanting to find out, I researched their origins in modern history, and was surprised to learn that when the government built the nation's first public park during the Meiji Era (1868-1912), the primary reason was to prevent the spread of epidemics.

At the time, cholera was understood to be caused by damp, toxic "miasma."

And to keep the ground dry, the government concluded that the solution lay in creating open spaces.

"Parks are the lungs of the city" was an accepted theory in European cities that suffered from epidemics, and post-Meiji Restoration Japan embraced it.

Author Rohan Koda (1867-1947) became a passionate advocate of city parks, declaring in his works, "Parks turn decay into freshness," and "Parks must be places where the human soul is laundered, and the air is transformed."

In urban areas where many residents are now living under virtual house arrest, parks are like rare, precious oases, and that is especially true for children.

It saddens me every time I see a park with its playground equipment cordoned off and marked "Keep Out." The uniformity with which the prohibition is enforced is probably reflective of the herd mentality of local administrative authorities.

"What we are seeing may owe to the overreaction of administrators who are afraid of being criticized," noted Ryohei Ono, 57, a Rikkyo University professor and an expert on the history and design of parks.

"Every park is meant to be a place of rest and recreation, where visitors can simply walk in and enjoy doing nothing," he said.

Nowadays, a neighborhood park is about the only place I can think of when wondering where to go, and yet it's become rather unappealing.

How ironic is it that I can't feel free even to just take a deep breath in a place that was created more than 150 years ago as "the city's lungs.”