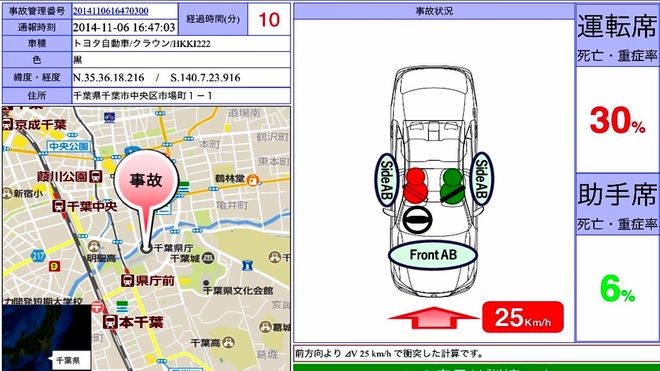 The possibility of a driver having suffered fatal or serious injuries is estimated at 30 percent based on the impact of collision and other factors in a sample image to be sent to a hospital with a medical helicopter during a trial of the D-Call Net emergency report system. (Provided by Yuichi Motomura)

When minutes count in saving lives, a system pioneered in Japan called D-Call Net is making all the difference.

The system automatically alerts rescue services and hospitals to car wrecks when a driver is immobilized with serious injuries.

The time it takes for assistance to arrive and for medical treatment to begin often is the deciding factor in whether a life is saved or lost. Most of the time, that depends on whether a vehicle is fitted with the emergency system.

In the case of a collision between a minivehicle and a passenger car in Chiba Prefecture outside Tokyo in January 2018, a doctor arrived by helicopter at the crash site within minutes to transport a critically injured motorist to a medical center.

The driver began receiving life-saving treatment within 30 minutes of the accident that also left the other driver with injuries.

The incident illustrated the speed in which emergency services are able to respond when a motorist is incapacitated and unable to summon medical assistance.

Use of the D-Call Net system is spreading among fire stations and hospitals nationwide and significantly reducing the time in starting medical treatment after an accident, increasing the survival rate of severely injured motorists.

A rescue helicopter at a nearby hospital in the prefecture was in the air within three minutes and arrived at the crash site 10 minutes later.

The driver requiring emergency treatment was hospitalized with a broken sternum.

D-Call Net automatically activates when the air bag in a vehicle inflates or when car-mounted sensors register a certain degree of impact in an accident.

An automated transmitter relays data on the direction and strength of impact as well as other key elements to a dedicated server via the cellphone communications network.

The server computer promptly estimates the possibility of the motorist having suffered fatal or serious injuries, and notifies the local fire defense headquarters and medical institutions with a rescue helicopter of the vehicle's location and whether emergency services are needed.

Based on the alert and severity of injuries, firefighting authorities liaise with doctors and the emergency call center for drivers to decide whether to dispatch an ambulance or a medical helicopter.

The D-Call Net system was developed by a designated nonprofit organization called the Helicopter Emergency Medical Service Network (HEM-Net) in conjunction with a consortium whose members include Toyota Motor Corp. and Honda Motor Co.

It is said to be the first such system of its kind.

Although some automakers had already developed automatic report services via a dedicated call center, no mechanism existed that allowed physicians to refer directly to accident information to determine whether a patient needs to urgently reach a hospital by ambulance or other means.

D-Call Net was tested in Hokkaido and eight prefectures, including Chiba, from November 2015. The system was initially fitted in upscale models manufactured by Toyota and Honda. Nissan Motor Co., Mazda Motor Corp. and Subaru Corp. followed suit in March 2019.

Currently, the system is in place at all 730 or so local fire defense headquarters and 60 medical centers with helicopters in 44 prefectures, including Aichi, Osaka and Fukuoka.

The overriding issue in saving lives comes down to the time it takes before starting treatment.

According to an estimate by the HEM-Net based on medical helicopter dispatch records from the Japanese Society for Aeromedical Services and other sources, therapy began just 21 minutes after accidents on average in D-Call Net trial operations, whereas it normally takes an average of 38 minutes for treatment to begin.

Yuichi Motomura, a doctor and lecturer at the first-aid center of Nippon Medical School’s Chiba Hokusoh Hospital in Inzai, Chiba Prefecture, which was involved in the development of D-Call Net, called for greater adoption of the system to save lives.

“The more time passes from the point of injury, the more difficult it becomes to save lives or mitigate the after-effects caused by injuries,” Motomura noted.

Of the 60 million passenger cars on the road in Japan today, only 1.2 million, or one in 50, are equipped to connect with D-Call Net.

Despite the merits of the system, cases have emerged of hospital staff failing to notice emergency reports of traffic accidents.

Hirotoshi Ishikawa, a director at HEM-Net in charge of D-Call Net development who once worked as a car accident investigator with the National Police Agency's National Research Institute of Police Science, referred to low awareness of the service as "most problematic” factor.

One problem is that the system does not register information on pedestrians and cyclists hit by automobiles compatible with D-Call Net.

Another is that most vehicles do not have sensors around rear seats, rendering it impossible for D-Call Net to determine whether people are sitting there.

With an eye to solving these issues, the HEM-Net is creating a device to be added to automobiles so that the dashcam can instantly send images of other cars caught up in accidents and the interior of the damaged vehicle, to medical institutions.

If all goes to plan, it will become easier to decide how many ambulances are needed and the degree of urgency, according to HEM-Net officials.

“The system decides whether lives can be saved, so all possible technical challenges need to be tackled aggressively,” Ishikawa said.