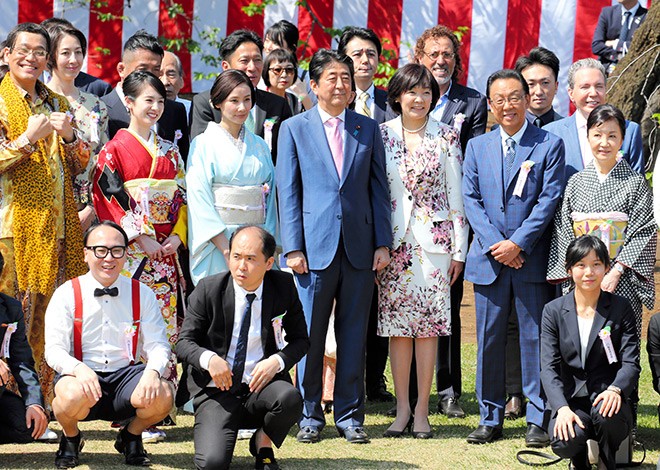 Legal experts filed a criminal complaint against Prime Minister Shinzo Abe on May 21 over a dinner reception held for his supporters before a cherry blossom viewing party in 2018.

The complaint, signed by 662 lawyers and scholars, was submitted to the Tokyo District Public Prosecutors Office and accuses Abe and two leaders of his support group of violating the Public Offices Election Law and the Political Fund Control Law.

The dinner party was held at a hotel in Tokyo. The guests were mainly Abe’s supporters and constituents, and they were each charged 5,000 yen ($46), a price well below the hotel’s normal rate.

The group of lawyers and scholars said the dinner party likely cost more, and that Abe made up the balance, which is deemed an illegal act of endowment.

In addition, revenues or expenditures for the dinner party never appeared in his support organization’s report on political funds, the group said.

Abe has reiterated that the 5,000 yen price was set by the hotel, and that the contract for the reception was made between the hotel and an individual party participant. Therefore, he said, his support organization “did not make any revenues or expenditures at all.”

The reception was held on the eve of a taxpayer-funded cherry blossom viewing party in Tokyo’s Shinjuku Ward.

These annual sakura parties hosted by Abe have been another source of scandal, involving wider use of public funds and now-missing lists of those invited.

Some lawyers in February formed a group to pursue the sakura party-related scandal and called for more people to support possible legal action against the prime minister.