‘One Cut of the Dead’ sequel captures climate of coronavirus 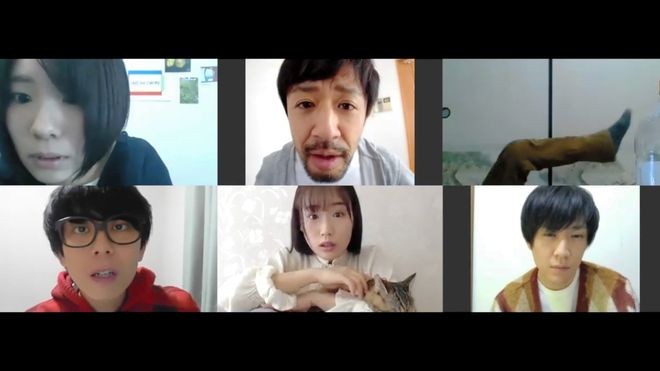 A scene from “One Cut of the Dead Mission: Remote”

Director Shinichiro Ueda’s sequel to his smash-hit comedy horror film “One Cut of the Dead” owes its inspiration to the current “stay home” culture imposed by the novel coronavirus pandemic, a cut-off society it deftly reflects.

“One Cut of the Dead Mission: Remote” was released for free streaming on YouTube on May 1.

The movie opens with a video director starting to shoot a short film in a completely remote environment after he is asked to produce a dramatic re-enactment amid stay-at-home requests.

The 26-minute short captures the current culture of social distancing and teleworking by employing split-screen video conferencing and selfie videos shot by smartphones.

Much like the resulting film's narrative, Ueda, unable to work with cast members from the original “One Cut of the Dead” in person, had to bring them together remotely to produce the sequel.

“What I can do now is to deliver a cheerful work of entertainment. The words ‘Kamera o Tomeru-na!’ (Don’t stop the camera!) started to close in on me again,” Ueda said in a interview done remotely, referring to the original Japanese title of “One Cut of the Dead.”

Ueda completed the new short featuring familiar faces from the original in about a month after coming up with the idea for it.

In one scene, Ueda pokes fun at the pitfalls of remote production, stringing selfie footage shot by the characters in different locations edited into a single sequence that has clear inconsistencies in backgrounds and time.
The director incorporated video clips solicited from at least 300 people via social media into the film.

At a time when many cinemas in Japan have closed due to the coronavirus, Ueda decided to post “Mission: Remote” for free on YouTube to allow as many fans to see it as possible.

Ueda is also supporting the Mini-Theater Aid crowdfunding campaign, which helps small cinemas that have been shuttered by the virus, by providing undisclosed footage and video messages as special perks.

“One Cut of the Dead” was initially shown at two art house cinemas before it caused a stir on social networking sites and went on to become a major hit.

“I could never have started without art house theaters,” the director said. “They’re like a forum to nurture filmmakers and movie buffs, and I think it’s really terrible to see them lost.”