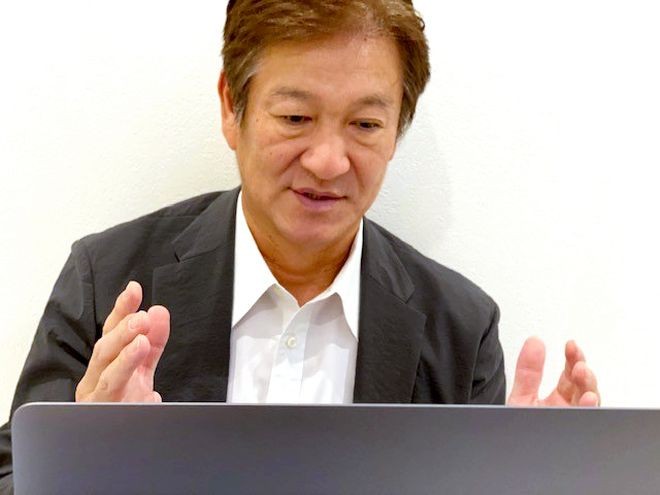 Former Hanshin Tigers head coach Atsushi Kataoka poses on May 16. He was hospitalized for COVID-19 for 17 days. (Provided by Atsushi Kataoka’s YouTube channel)

Former professional baseball player Atsushi Kataoka never believed he would be infected with the novel coronavirus.

But reality sunk in when he was laying in a hospital bed with tubes stuck in his nose, unable to move or eat and praying for recovery from the agony caused by COVID-19.

Kataoka, 50, who also coached the Hanshin Tigers, battled the disease for 17 days and provided updates on his condition on YouTube.

He detailed his story in an online interview with The Asahi Shimbun and again expressed his gratitude to the health care workers.

I found it difficult to breathe and called a medical center on the night of April 7, when the government declared a state of emergency.

At the time, other family members were visiting the home of my wife’s parents for spring vacation. So I drove by myself.

When I arrived at the hospital’s counter, I was told to “wait in your vehicle in the parking lot.” A nurse in a protective suit emerged and found my body temperature exceeded 38 degrees.

Based on the CT results, I was told that I had “developed pneumonia.” After undergoing a polymerase chain reaction (PCR) test, I was hospitalized with nothing but the clothes on my back.

The following morning, I was shocked to learn that I tested positive. I had never seriously considered the possibility that I could come down with the disease.

On the evening of April 8, I was transferred by ambulance to another medical center with an intensive care unit.

Since I throw with my right hand, I always had a needle inserted into the left arm to receive intravenous drips. But at the hospital, a blood vessel did not surface apparently due to my deteriorated health.

So the needle was applied to my right arm for the first time. At that point, I thought that the state of my body was reflecting my health condition.

At the hospital, I had a terrible cough and my fever would not subside. I had to stay in bed and could not breathe smoothly.

When I sat up on the bed to go to the restroom, I felt pressure in my lungs. What I felt was not pain but something constraining. It was the first time in my life that I really felt unable to move.

I received oxygen treatment through tubes inserted in my nose. Because I could not rise up, it was impossible to have meals for three days.

My one-person room in the hospital had double doors. A shower room, toilet, lavatory and dustbin were available behind the first door.

Each time the nurses left my room, they removed their masks and protective suits for disinfection and then went out through the second door.

Seeing that, I honestly thought that they were working hard in horrific conditions.

I ingested the anti-flu medicine Avigan. My doctor explained its side effects when the blood test results showed the inflammation had worsened, making me feel horrified. I hoped from the bottom of my heart that my condition would improve with Avigan even though I may have suffered from the side effects.

I took eight tablets each in the morning and night.

Four or so days after Avigan started to be administered, my body temperature started to decrease. I felt that the virus was being eliminated from my body, and I became able to consume fruits and utter some words.

That day, I reported my infection on my YouTube channel. I wanted to be of help to struggling patients and those around them by sharing my story.

The number of pills was lowered to four each in the morning and night.

Two weeks after the start of the hospitalization, I was tested for the virus again. The first PCR test came back positive, but I tested negative on the second occasion, leading to a re-examination.

When the results were negative in two consecutive rounds, I was about to jump with joy. The tears did not stop as I felt I could return home alive. I was discharged from the hospital on April 24.

Health care providers are still fighting the virus on the front lines. They helped me so much.

If fewer people are infected with the virus, the pressure on health workers will be lighter.

The most important thing is abandoning the idea that “only a single new patient will not add to their burden.”

The encouraging comments on my YouTube channel have greatly helped me mentally. I want to say thank you for them here.

(This interview was conducted by Hideki Muroya, a staff writer of The Asahi Shimbun.)