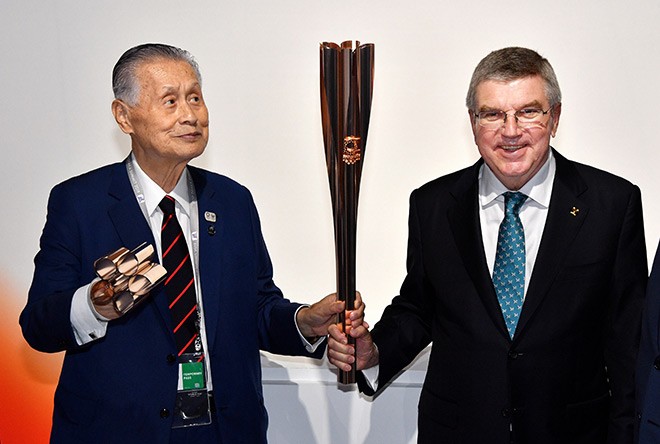 A top Tokyo Olympic official on May 21 said he was caught off-guard by the assertion from the International Olympic Committee president that the event will be canceled if it cannot be held next year.

Toshiro Muto, CEO of the Tokyo Organizing Committee of the Olympic and Paralympic Games, said during a videoconference that he had not heard directly from IOC chief Thomas Bach about any plan to scrap the Tokyo Olympics if the novel coronavirus pandemic makes it difficult to hold the Summer Games in 2021.

Prime Minister Shinzo Abe in March announced that the Tokyo Olympics would be delayed until 2021 because of the virus.

But in a May 20 interview with the BBC, Bach indicated the Tokyo Olympics would be canceled if it could not be held in 2021.

Bach added that he was told by Abe that holding the Tokyo Olympics in 2021 was the last option.

Muto said he sat in on the videoconference on March 24 between Abe and Bach.

“To the best of my memory, the prime minister did not say anything about a last option,” Muto said on May 21.

Yoshiro Mori, the president of the Tokyo Olympic organizing committee, has indicated in interviews with Japanese media organizations that he also believed that the Games would have to be cancelled if the virus forces another delay next year.

Regarding those comments, Muto said he felt Mori was trying to stress that preparations should be pushed ahead with the strong intention that the Olympics must be held in 2021.

“I do not believe that Mori and Bach share a common understanding” about a possible cancellation, Muto added.

In the BBC interview, Bach was asked about the possibility of holding the Tokyo Olympics without fans in the stands.

“I would ask you to give me some more time for consultation with the athletes, with the World Health Organization, with the Japanese partners,” Bach replied.

Regarding the possibility of holding the Olympics in empty venues, Muto said: “It is too early to be discussing such issues since there is more than a year to go. While I do not deny the need to come up with measures to deal with the coronavirus pandemic, I do not believe now is the right time to be making a detailed answer.”

The one-year delay in holding the Tokyo Olympics is estimated to cost an additional 300 billion yen ($2.8 billion).

On May 14, the IOC decided on $650 million (about 69.9 billion yen) on expenditures to organize the Tokyo Olympics for 2021. However, it is still unclear how much of that money will go to the Tokyo Olympic organizing committee.

Muto said more time would be needed to determine the additional amount needed because of the one-year delay.

(This article was written by Hiroki Tohda in London and Daisuke Maeda in Tokyo.)