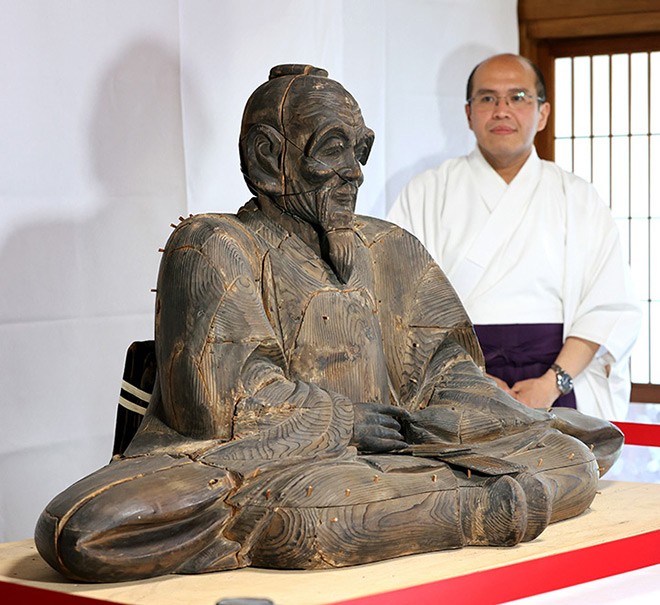 A newly discovered wooden statue of the warlord Toyotomi Hideyoshi shown on May 20. Behind the statue is Tetsu Hirose, chief priest of Omiyajinja shrine in Osaka’s Asahi Ward. (Takaharu Yagi)

OSAKA--A life-size wooden statue of the warlord Toyotomi Hideyoshi has been discovered at Omiyajinja shrine here, providing a clue to how people worshipped him during his successor's era.

Osaka city’s board of education announced the discovery on May 21.

The board said the statue was made during the Edo Period (1603-1867) and is the biggest wooden statue of Hideyoshi (1537-1598) ever discovered in the country, except for those created in the modern and current eras.

The seated statue, which is 81.9 centimeters tall, was made by assembling pieces of “hinoki” cypress. According to the education board, it is bigger than the 81-cm statue in Saihoji temple in Kyoto’s Sakyo Ward, which was believed to be the largest among 20 or so existing statues of Hideyoshi, also known as Toyokuni Daimyojin (great deity), around the country.

The latest discovery has long eyebrows and a mustache, as well as crescent-shaped eyes. The statue is wearing a traditional formal court dress, but its headgear was lost and color painting on the statue was deliberately removed.

The statue was discovered inside Korasha, a shrine affiliated with Omiyajinjya shrine in Osaka's Asahi Ward and located on its premises. According to Tetsu Hirose, chief priest of Omiyajinjya shrine, the statue was behind the Korasha shrine door, which was sealed with nails, but was found last year during research conducted ahead of renovations.

After his death, Hideyoshi was worshipped as a god at Toyokunijinja shrine in Kyoto and other parts of the country. However, after Tokugawa Ieyasu (1543-1616) demolished such shrines after he defeated the Toyotomi family, it became difficult for people to worship Hideyoshi in public.

Still, Hideyoshi remained very popular, mainly around Osaka, and “Ehon Taikoki,” an illustrated biographical record of him published in the late 18th century, became a huge hit. The Tokugawa Shogunate banned the book but could not prevent a boom in Hideyoshi’s popularity, as many “joruri” puppet theaters and kabuki stages in Osaka and Kyoto performed plays adapted from the book.

Some records show Omiyajinja shrine was opened to the public in 1823, and the statue of Hideyoshi was reportedly shown to the public at that time as well.

“The statue looks like a good-natured old man and that is very rare because statues of a god are normally designed to show dignity,” said Yoichi Hase, a professor of Japanese sculpture history at Kansai University. “The color painting on the statue might have been removed before the exhibition to conceal the fact that it is a statue of Hideyoshi.”

The statue is expected to be put on public display by April next year.