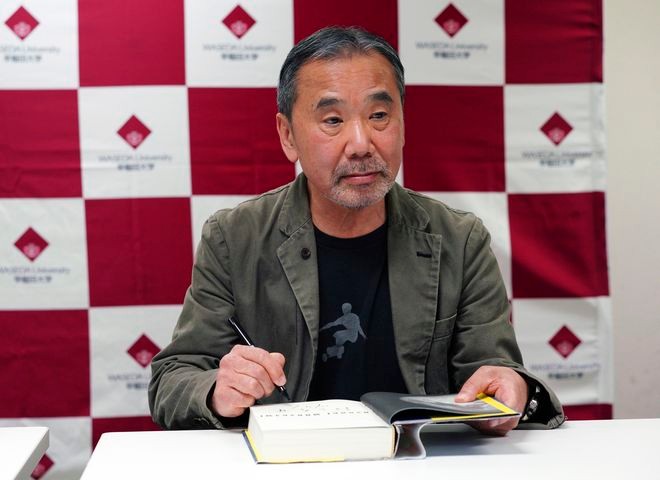 In this Nov. 3, 2018, file photo, Japanese novelist Haruki Murakami signs his autograph on his novel "Killing Commendatore" during a press conference at Waseda University in Tokyo. (AP Photo)

Acclaimed Japanese novelist Haruki Murakami, hosting a special radio show from home, painted a brighter side of the world with his favorite music, and said the fight against the coronavirus is a challenge in figuring out ways to help and care for each other.

The 71-year-old, known for bestsellers such as “A Wild Sheep Chase” and “Windup Bird Chronicle,” said Friday he hoped the show would “blow away some of the corona-related blues.”

Murakami opened the two-hour late night show “Murakami Radio Stay Home Special” with “Look for the Silver Lining” by the Modern Folk Quartet, followed by 16 other songs, selected from classical to jazz, pop and rock. Their common thread: smile, sunshine, rainbow, birthday memories and other happy sides of life.

Murakami said comparing the fight against the coronavirus to a war, as politicians often do, is inappropriate. “It’s a challenge for us to figure out how we can share our wisdom to cooperate, help each other and keep balance. It’s not a war to kill each other but a fight of wisdom to let us all live,” he said. “We don’t need enmity and hatred here.”

Music serves as an important motif in Murakami’s stories. An avid listener and collector of music, he has also written books on the topic and has a library of records in his study, where Friday’s program was prerecorded.

Murakami has hosted his “Murakami Radio” every two months since August 2018 on Tokyo FM. The station said Friday’s show was Murakami’s idea to cheer up those who are under stress, living under a coronavirus state of emergency still in place in parts of Japan, including Tokyo.

Murakami began writing while running a jazz bar in Tokyo after graduating from university. Following his 1979 debut novel “Hear the Wind Sing,” the 1987 romance “Norwegian Wood” became his first bestseller, establishing him as a young literary star. Recent hits include “1Q84” and “Killing Comnendatore.”

A perennial contender for the Nobel Prize in literature and a social recluse, Murakami said he has worked from home for years and the lifestyle has little changed, though “the corona situation” did affect him in many ways, possibly an inspiration for his future work.

Murakami has written stories inspired by events that have violently shaken the society, including the 1995 Tokyo subway gassing by an apocalyptic cult and the deadly quake in Kobe, where he grew up.

Rather than documenting an event as it develops, Murakami said that as a novelist he is more interested in transforming it into “a story in a different form,” though he doesn’t know when or how.

The world may be experiencing “a large-scale social experiment whose results could slowly spread across the entire society, for better or worse,” he said.

Murakami said he worries the post-corona world may be a more closed and selfish place even if it has better protection.

“If love and compassion are lacking, the world after the corona will surely be an edgy and insipid place even if masks and vaccines are abundantly distributed,” he said. “Love is important.”

Other songs on the playlist: “Waiting on a Sunny Day” by Bruce Springsteen; “Raindrops Keep Falling On My Head” by Isley Meets Bacharach; “Here Comes the Sun” by Nina Simone; “You’ve Got A Friend” by Carole King; “Over the Rainbow” by Ella Fitzgerald; “Sun Is Shining” by Bob Marley & The Wailers: “What A Wonderful World” by Louis Armstrong; “Happy Birthday Sweet Darling” by Kate Taylor; “Smile” by Eric Clapton; “My Favorite Things Featuring Kathleen Battle” by Al Jarreau; “She Wore a Yellow Ribbon” by Lisa Ono; “Happy Talk” by Nancy Wilson; “They Can’t Take That Away from Me” by Brian Wilson; “Put on a Happy Face” by Tony Bennett; “Over the Rainbow” by Fred Lowery; “We’ll Meet Again” by Peggy Lee with Benny Goodman; “Mon coeur s’ouvre à ta voix” by Sigrid Onégin; “What the World Needs Now Is Love” by Wei Wei Wuu.