Tokyo, Hokkaido likely will see emergency state lifted on May 25 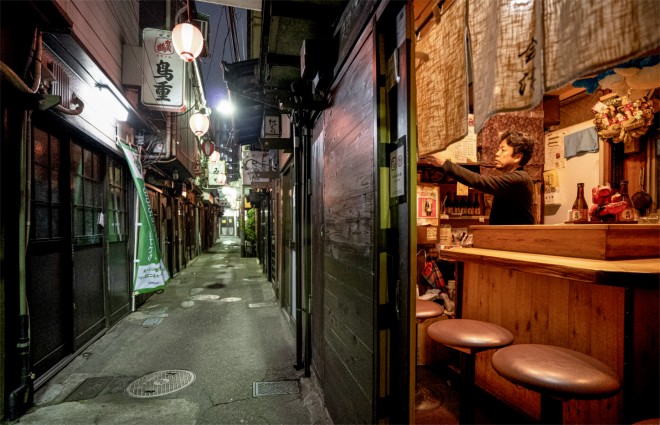 Koichiro Mikuriya visits Aizu, a Japanese-style izakaya pub he owns, every three days to let fresh air in Nonbei Yokocho (heavy drinker's alley) in Tokyo’s Shibuya Ward on May 20. He shut down the establishment in early April due to the new coronavirus. (Hiroki Endo)

Japan is moving toward lifting the state of emergency over the new coronavirus for Tokyo and the three neighboring prefectures remaining under the declaration as well as Hokkaido on May 25.

The ratio of new infections must be near or below the criteria set by the government to end the measure.

The lifting would make the entire nation free from a state of emergency, which was first declared by the central government for Tokyo and six prefectures on April 7. It was expanded to all of Japan on April 16.

It has been lifted in stages, leaving Tokyo and the four prefectures as the only areas still under an emergency state.

On May 23, Prime Minister Shinzo Abe met with Chief Cabinet Secretary Yoshihide Suga, health minister Katsunobu Kato and Yasutoshi Nishimura, minister in charge of measures to cope with the coronavirus, and other government officials to assess the spread of the contagion.

Nishimura said at a news conference later that day that there were fewer new cases in Tokyo and Saitama, Chiba and Kanagawa prefectures as well as Hokkaido and that more hospital beds are available for patients with COVID-19.

“We are seeing a positive development,” he said. “We will ask experts to make a final assessment of the contagion before we decide on whether the state of emergency can be lifted.”

A senior government official said on the night of May 23 that although new confirmed cases on May 24 should also be taken into consideration, lifting the state of emergency for Tokyo and the four prefectures on May 25 is almost a certainty.

Another senior official in the prime minister’s office echoed a similar view unless there is a spike in infections on May 24.

The government is set to weigh factors such as the scope of the contagion, the ability of the health care system and the capacity for comprehensively monitoring and testing potential virus carriers before making the official decision.

A key gauge is whether the number of new confirmed cases in the most recent week is below 0.5 or so per 100,000 people.

Data obtained by The Asahi Shimbun showed that as of 8 p.m. on May 23, the figure for the week from May 17 to May 23 was 0.29 for Tokyo. There were only two newly confirmed cases in the capital on May 23.

Many government officials agreed that there is no problem in lifting the emergency declaration for Tokyo.

The figures were 0.63 for Hokkaido and 0.70 for Kanagawa Prefecture, levels not meeting the target.

But the prime minister’s office is leaning toward lifting the emergency for the two prefectures as well, noting that new cases are on the decline and that most of the transmission routes are traceable there.

But some experts on a government task force urge more caution, saying the state of emergency should be lifted only after the number of new cases drops further.

The government plans to seek the opinion of the expert panel when it meets on May 25 if there is no surge in new infections on May 24.

(This article was written by Shinya Takagi and Ayako Nakada.)