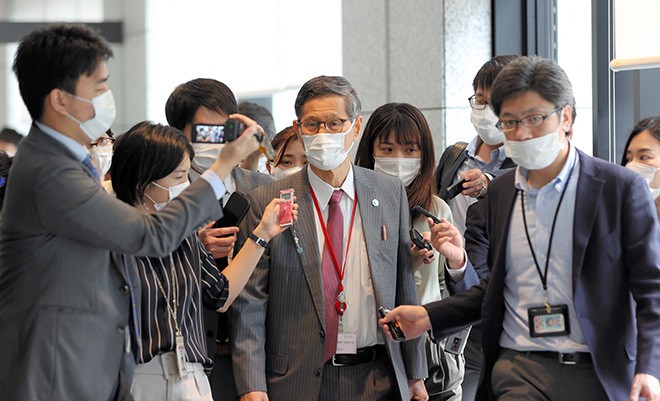 Shigeru Omi, chair of an advisory panel to the government on the new coronavirus, is surrounded by reporters after an earlier session on May 25. (Nobuo Fujiwara)

Prime Minister Shinzo Abe announced the government's decision to lift Japan’s remaining state of emergency over the new coronavirus in Tokyo, Hokkaido and three prefectures neighboring the capital at a news conference on May 25.

Earlier in the day, an expert panel advising the government approved the move, which would mark the end of the declaration that was issued for Tokyo and six prefectures on April 7 and extended nationwide April 16.

Only five areas in Japan remain under the state of emergency at present: Tokyo and Saitama, Chiba and Kanagawa prefectures, as well as Hokkaido.

Infectious disease expert Shigeru Omi, who serves as the chair of the panel on the coronavirus, called on the government to continue monitoring and examining the contagion in Hokkaido, Tokyo and Kanagawa Prefecture.

The lifting of the state of emergency is expected to be made official at a meeting of the government’s task force to fight the pandemic later on May 25.

At the earlier advisory panel meeting, Yasutoshi Nishimura, minister in charge of measures to stem the coronavirus contagion, also asked members to review the government's revised policy for fighting the pandemic.

Restrictions on staying home, holding events and use of public venues will be eased in three stages lasting about three weeks each, according to a draft revision of the policy obtained by The Asahi Shimbun.

The first stage will be through June 18, to be followed by the second stage from June 19 to July 9 and the third stage beginning around July 10.

The proposed revision recommends that people avoid making nonessential trips beyond their own prefectures until the end of May.

In the first stage, residents will be urged first to focus on contributing to economic renewal in their home prefectures and not to travel to the greater Tokyo area and Hokkaido unless necessary.

In the second stage, professional sports organizations will be allowed to hold games without spectators. The government also will begin considering relaxing restrictions on night clubs and similar venues during this stage.

From the third stage, travel between prefectures will be permitted.

During each stage, the size of events will be allowed to expand step by step, but the government will urge organizers to limit audiences to around half of capacity for indoor events.

Three criteria are assessed for lifting the state of emergency: the number of new infections; whether hospitals have sufficient capacity to handle COVID-19 patients; and the capacity of surveillance systems to detect virus carriers.

New cases must be below 0.5 or so per 100,000 people in the most recent week to justify lifting the state of emergency.

In Tokyo, new cases stood at 0.36 as of the week through May 24, data compiled by The Asahi Shimbun showed. The numbers for Saitama and Chiba prefectures also cleared the target.

But they hit 0.76 in Hokkaido and 0.70 in Kanagawa Prefecture, failing to meet the level.

The panel advised, however, that the emergency declaration be lifted for those areas as well, noting that in both places, the trajectory of new cases is on the decline and sufficient hospital beds are available to treat patients with COVID-19.