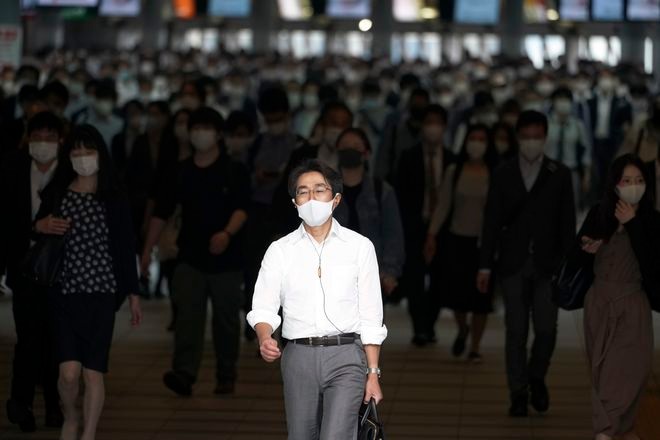 A station passageway is crowded with commuters wearing face mask during a rush hour on May 26 in Tokyo. Prime Minister Shinzo Abe announced the lift of a coronavirus state of emergency from Tokyo and four other remaining prefectures on May 25. (AP Photo)

"Jishuku keisatsu" (literally, "self-restraint police") was an expression I heard frequently while the government's state of emergency declaration was in force.

The "policing" was ugly. Sanctimonious individuals took to social media to expose and revile fellow citizens who were not complying with state-mandated COVID-19 restrictions.

But on second thought, perhaps I could also say that we have so far weathered the crisis without unleashing the greater ugliness of becoming a "police state."

Even in European nations where human rights are treated as sacrosanct, authorities enforced draconian punitive measures. I was stunned by video footage of police officers patrolling the streets of Paris and cracking down on offenders.

But that didn't stop more than 20,000 French citizens from succumbing to the pandemic.

In contrast, Japan has managed to keep fatalities relatively under control with looser restrictions.

But the nation is currently faced with another grave problem.

Even though there has been no overshoot, the Japanese health care system is on the verge of collapse.

There are reports of ambulances transporting infected individuals and being turned away from dozens of hospitals. The dire shortages of face masks, gowns and other personal protective equipment is exposing front-line health care providers to grave risk.

I never knew how fragile our health care system really was.

The number of doctors per 1,000 Japanese citizens is less than half of Germany's, and the lowest among the world's seven most advanced nations.

Could it be that Japan has made excessive cuts in personnel and facility investments to curtail health care expenditures? Serious examinations and discussions are called for in the days ahead to determine which parts of the system need to be improved, and by how much.

The Japanese equivalent of the English adage "Danger past and God forgotten" is "Nodomoto sugireba atsusa wo wasureru," which translates literally as "Once swallowed down the throat, the heat is forgotten." And a Chinese version, as I understand it, goes something like, "The pain is forgotten when the scab comes off."

At present, Japan's crisis is still caught in the throat, so to speak, or hasn't yet turned into a scab.

But it is time to start thinking about the near future.