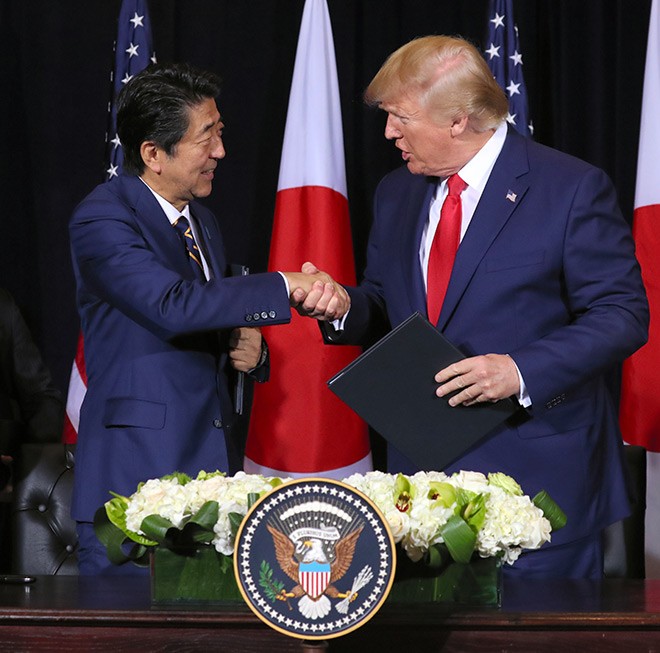 Prime Minister Shinzo Abe promised U.S. President Donald Trump in a phone call that Japan would purchase about 1,000 excess ventilators from the United States, according to Japanese government sources.

The bulk order is an about-face, after the government previously declined offers from Washington, maintaining it was well stocked.

“They are ready for shipping any day now,” Trump told Abe in the May 8 phone call, reportedly in a good mood over the prime minister's pledge for the extra machines, sources said.

Just days before, Washington approached Tokyo with a sales pitch, looking to offload some of its newfound surplus of the medical equipment, but it was initially rejected.

“We have made too many ventilators. We need your help,” a U.S. representative said, according to sources knowledgeable about the matter.

“We have a sufficient supply of ventilators,” a Tokyo official replied, as the Japanese government has increased domestic production of ventilators, according to sources.

But the prime minister’s office decided to review the offer, as many countries around the world look to secure the medical devices amid the pandemic. Abe then decided to buy excess “Made in USA” ventilators to prepare for a second wave of COVID-19, sources said.

“Extra ventilators are nice to have,” a Japanese government official said, explaining the administration's decision. “And they are way cheaper than the ones made in Japan.”

Ventilators are artificial respiration devices used in hospitals and required in some cases to keep critically ill COVID-19 patients alive. Medical professionals require training before using the complicated machines on patients. They can cost thousands or tens of thousands of dollars per unit.

Trump has boasted for weeks about how the United States quickly ramped up production of the machines to address its own supply shortages, and has spoken about potential ventilator deals with Mexico, Indonesia, France and Italy.

“Ventilators are a big deal, and we are now the king of ventilators,” Trump boasted during a COVID-19 briefing at the White House on April 19. “We have so many ventilators. You know, I said nobody that needed a ventilator has been turned down. It’s pretty amazing. Nobody.”

U.S. manufacturers, such as General Motors, retooled to boost production, leaving the United States with a surplus.

Meanwhile, the South Korean government has said it would send polymerase chain reaction (PCR) test kits to Japan, if the Japanese government requests them.

A high-ranking official within the Abe administration stressed the difference between the two countries: “Well, the U.S. government made us an offer but South Korea hasn’t.”