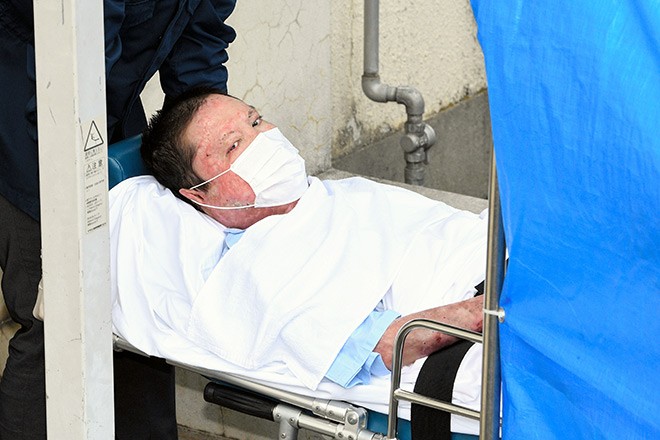 Shinji Aoba, who is suspected of murdering 36 people in an arson attack against Kyoto Animation Co., is transferred to the Fushimi police station building on May 27. (Nobuhiro Shirai)

KYOTO--Police on May 27 arrested a recovering burn patient on suspicion of murdering 36 people by setting fire to a studio of Kyoto Animation Co. here last year, investigative sources said.

Kyoto prefectural police assessed that Shinji Aoba, a 42-year-old resident of Saitama, has sufficiently recovered from the severe burns he suffered in the arson attack to be moved to a detention facility for questioning.

He was transferred to the Fushimi police station building in the city’s Fushimi Ward on a stretcher on May 27.

He has admitted to the allegations of murder and arson, the sources said.

According to the investigation, Aoba entered the first floor of the No. 1 studio of the popular animation company around 10:30 a.m. on July 18, poured gasoline on the floor and then set it on fire.

Investigators suspect he intended to kill everyone in the three-story building because he believed Kyoto Animation had stolen his work.

In the attack, 36 people were killed and 34 were injured, many of them seriously. One victim remains hospitalized, according to the sources.

Security cameras captured Aoba near the No. 1 studio before and after the attack.

Aoba was also severely burned in the blaze. Police took him into custody after capturing him about 100 meters south of the studio.

He fell unconscious and was in critical condition with burns to his entire body after he was taken to a hospital.

Two days after the attack, he was transferred to a hospital in Osaka Prefecture where he could receive advanced treatment for burns.

He was moved back to the Kyoto hospital in November as his condition gradually improved through repeated skin transplant procedures.

Although he cannot wake up or walk on his own, he can converse to some extent, according to the sources.

Doctors said Aoba’s condition, which has remained stable since spring, is strong enough for detention at a law enforcement facility.

His arrest came after the state of emergency over the new coronavirus was lifted for Kyoto Prefecture on May 21.