Teleworking embraced in Tokyo even after emergency lifted 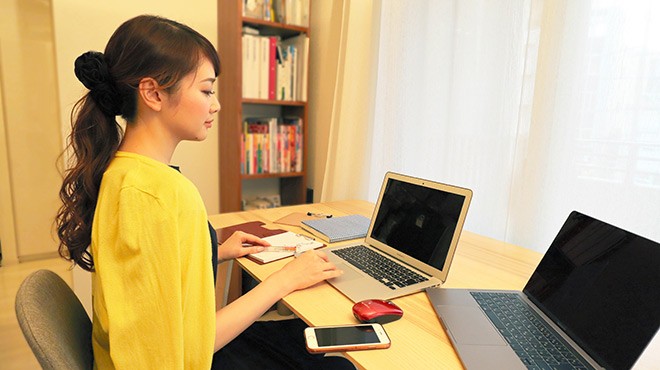 Teleworking looks likely to be the new norm for many companies even though the government lifted its nationwide state of emergency over the COVID-19 pandemic on May 25.

While business activity is resuming like before in a range of sectors, many companies are requesting that employees continue to work from home due to fears of a second wave of infections.

Multinational conglomerate Hitachi Ltd. said May 26 that teleworking will continue to remain in effect as a matter of company policy.

In announcing its new work style plan the same day, Hitachi said it aims for only 50 percent of its 33,000 or so employees in Japan to report to work from April 2021.

It will keep the figure to around 30 percent until this July and then start preparing for the new work style on a full-scale basis at the start of the new fiscal year in April.

From June, Hitachi will begin paying an allowance of 3,000 yen ($28) a month to all employees to cover costs associated with teleworking.

It will also provide a subsidy for those who purchase computers and other IT tools that people need for their work, as well as work desks and chairs.

In addition, Hitachi will give 500 yen to 1,000 yen per day to employees working in environments that pose a high risk of infections.

The company currently operates a seniority-based personnel management system whereby employees can be assigned to any kinds of work tasks and are rewarded based primarily on their seniority.

But from August, Hitachi will start considering a new work style based on job description as it shifts to a Western-style management system where employees are hired for certain jobs and rewarded based on their performance.

Hitachi wants to accelerate the shift as teleworking takes root at the company.

“Expanding business operations globally requires diversity in workforce and work style,” Hidenobu Nakahata, a senior vice president and executive officer of Hitachi, said at a May 26 news conference. “We will soon start shifting to a new work style.”

Many companies are adopting teleworking as their main work style and have set numerical targets to keep the proportion of employees reporting to work low.

Fujitsu Ltd., a leading provider of information systems, is moving to have only up to around 25 percent of its employees coming to its offices.

Kirin Holdings Co., a major beverage maker, set an upper limit of those who can report to work in June at 30 percent of its entire workforce.

Major convenience store chain operator Seven & i Holdings Co. aimed to have 70 percent of its employees at its head office working from home under the state of emergency. The company will keep promoting the work style with a new target of 50 percent.

A company representative noted that the new lifestyle will change the way its employees work.

At GMO Internet Inc., a major IT firm, some employees began reporting to work again from May 26. About 30 percent of the 4,800 or so employees on the company payroll will return to its offices this week and the number will increase from next week and beyond.

A GMO Internet official said the company quickly switched to remote working at the end of January, but some employees started calling for the need to communicate face to face to build a trust between them.

(This article was written by Taiki Koide, Takumi Wakai and Yoko Masuda.)