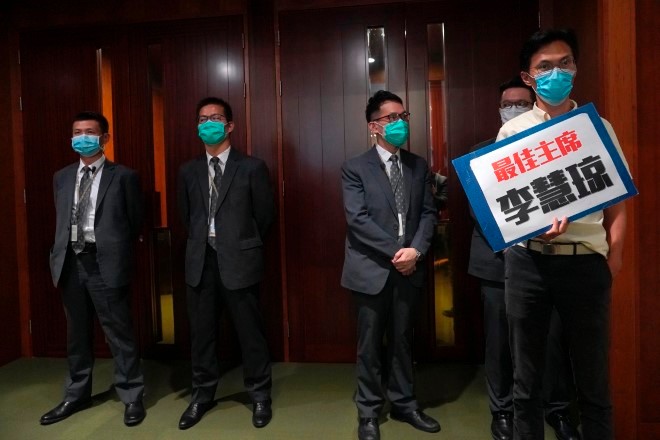 Pro-democracy lawmaker Eddie Chu, right, holds a placard reading “Best Chairperson, Starry Lee” as he stands outside the chamber of Legislative Council Complex after he was ejected minutes after a second-day legislative debate in Hong Kong on May 28. (AP Photo)

HONG KONG--Two pro-democracy lawmakers were ejected from Hong Kong’s legislative chamber Thursday morning, disrupting the start of a second day of debate on a contentious bill that would criminalize insulting or abusing the Chinese national anthem.

The legislature’s president, Andrew Leung, suspended the meeting minutes after it began and ejected lawmaker Eddie Chu for holding up a sarcastic placard that read “Best Chairperson, Starry Lee.”

Lee was recently elected chair of a key committee that sent the anthem bill to the full legislature for consideration. Her election, which the pro-democracy opposition contends was illegal, ended a monthslong filibuster that had prevented the committee from acting on the bill.

Chu was carried out by security guards, even as fellow pro-democracy lawmakers protested his removal and tried to stop it. Outside the chamber, he said Leung had objected to his placard Wednesday that called Lee an “illegal chairperson” and so he made a new one that called her the best chairperson instead.

“Actually, we have wanted to use any method to stop this national anthem law getting passed by this legislature, which is basically controlled by the Chinese Communist Party, because the law is just another way of putting pressure on Hong Kong people,” Chu said.

After the meeting restarted, a second pro-democracy lawmaker, Ray Chan, started yelling as Leung explained his decision to remove Chu, and the legislative president suspended the meeting again and ordered Chan ejected, too.

Other pro-democracy lawmakers surrounded Chan, who then hid under a table, as security officers tried to remove him. He eventually was carried out by the officers.