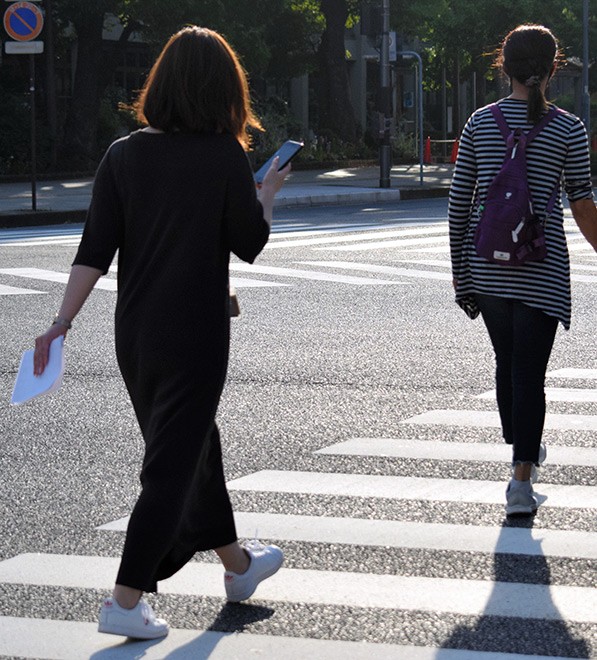 A pedestrian walks while checking her smartphone in Yokohama. (Chisato Hayashi)

The ordinance, to be presented to the city assembly in June, asks people to refrain from smartphone use while walking outdoors in public places and not to use phones in areas where they might block other pedestrians or vehicles.

As with many of Japan's ordinances, which rely on citizen's sense of social responsibility for enforcement rather than legal punishments, there is no penalty for breaking the ban, which is planned to be put into effect July 1.

But city officials otherwise tasked with watching for violators of traffic safety and smoking bylaws on streets will be out in force to warn walking smartphone users.

“You can only use your smartphone when you aren’t walking. I want people to embrace this message,” said Yamato Mayor Satoru Oki. “As society changes, administrators need to adjust to such changes, too."

One city assembly member questioned the necessity of issuing such an ordinance.

"It should be a manner (rather than a rule)," he said.

A university student expressed doubt the ordinance would have much effect.

“Many people may defy (the ordinance) if there is no penalty,” the 21-year-old said.

In January, a survey of around 6,000 pedestrians conducted in two areas of the city found about 12 percent of pedestrians used smartphones while walking.

The city in April also enacted an ordinance that asked citizens to wear face masks to prevent the spread of the novel coronavirus.