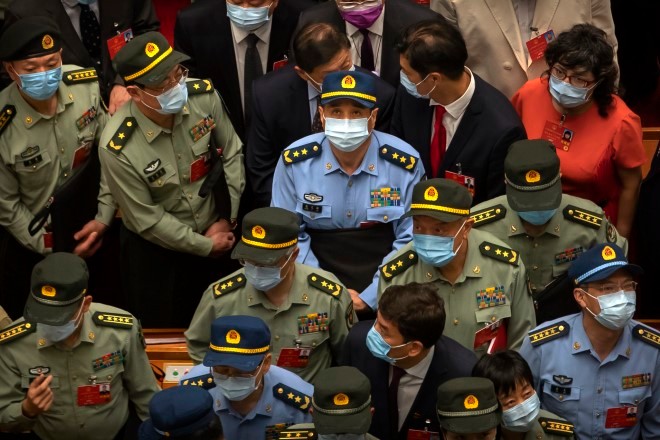 Military delegates wait to leave after the closing session of China’s National People’s Congress (NPC) at the Great Hall of the People in Beijing on May 28. (AP Photo)

HONG KONG--China officially ratified a plan Thursday to write a national security law for Hong Kong that exerts Beijing’s broader, new control over the semiautonomous territory in a bid to prevent a return of the months of often-violent protests last year.

The Beijing-backed Hong Kong government sought to assure its citizens that the law would not infringe on their freedoms, while the pro-democracy opposition described the move as the end of the core values that set the former British colony apart from the rest of China.

“From now on, Hong Kong is nothing but just another mainland Chinese city,” pro-democracy lawmaker Claudia Mo said.

China’s ceremonial legislature, ending a one-week annual session curtailed because of the coronavirus, approved a decision by the ruling Communist Party to impose national security laws on Hong Kong.

The body’s standing committee, a smaller group with decision-making power, is charged with developing the specific laws against secession, subversion, terrorism and foreign interference in Hong Kong’s affairs. No timetable has been announced, but they could be enacted at one of its next meetings in June and August.

Hong Kong leader Carrie Lam, who has come under fire for her handling of the protests, said the decision was welcome because of the difficulty her government faces in passing national security legislation on its own. The city’s Constitution requires it to enact such a law, but successive governments have been unable or unwilling to because of opposition.

Lam said in a statement that new laws would “sanction an extremely small minority of criminals who threaten national security” and “not affect the legitimate rights and freedoms enjoyed by Hong Kong residents.”

In a joint statement, top diplomats from the United States, United Kingdom, Canada and Australia reiterated their “deep concern” regarding Beijing’s decision to impose a national security law in Hong Kong.

Such a decision “would curtail the Hong Kong people’s liberties, and in doing so, dramatically erode Hong Kong’s autonomy and the system that made it so prosperous,” the statement said.

One of the signatories, U.S. Secretary of State Mike Pompeo, had notified Congress on Wednesday that the Trump administration no longer regards Hong Kong as autonomous from mainland China, setting the stage for the possible withdrawal of preferential trade and financial treatment that the United States gives to the former British colony.

Japan joined in the criticism of Beijing’s move. Chief Cabinet Secretary Yoshihide Suga said Japan is deeply concerned about the decision “amid strong concerns expressed by the international community and the people of Hong Kong.”

“Hong Kong’s citizens enjoy freedoms and rights that are guaranteed through the Basic Law and the ‘one country, two systems’ principle,” Maas said in a statement. “We expect these legal principles to be respected.”

Pro-Beijing lawmakers said Hong Kong would retain its high degree of autonomy under the “one country, two systems” framework that has governed the territory since Britain returned it to China in 1997.

“We truly believe that this decision made by the National People’s Congress would not harm the rights and freedom that Hong Kong people enjoy,” pro-Beijing lawmaker Martin Liao said. “It could solve the issue of violence and riot and let citizens return to a peaceful and stable life.”

As China’s orderly 3,000-member Congress rubber-stamped the move in Beijing, Hong Kong’s legislature was taking on another bill that would criminalize insulting or abusing the Chinese national anthem in a raucous session in which three pro-democracy lawmakers were ejected and proceedings halted for about five hours.

The legislature’s president, Andrew Leung, suspended the meeting shortly after it began and ejected Eddie Chu for holding up a sarcastic sign about a pro-Beijing lawmaker that read “Best Chairperson, Starry Lee.”

A second pro-democracy lawmaker was thrown out for yelling after the meeting resumed, and then a third after rushing forward with a large plastic bottle in a cloth bag that spilled its brownish contents on the floor in front of the president’s raised dais.

“We have wanted to use any method to stop this national anthem law getting passed by this legislature, which is basically controlled by the Chinese Communist Party, because the law is just another way of putting pressure on Hong Kong people,” Chu said outside the chamber.

He said the legislature’s president had objected to his placard calling Lee an “illegal chairperson” during Wednesday’s first day of debate, so he made a new one that called her the best chairperson instead.

Lee was recently elected chair of a key committee that sent the anthem bill to the full legislature for consideration. Her election, which the pro-democracy opposition contends was illegal, ended a monthslong filibuster that had prevented the committee from acting on the bill and other legislation.

After the meeting restarted, pro-democracy lawmaker Ray Chan started yelling, and Leung ordered him ejected, too. Then a rushing Ted Hui kicked the cloth bag toward the president’s dais after security officers grabbed him and it fell from his hands.

Members left the chamber, security guards sprayed disinfectant and cleaning workers arrived to wipe the carpet. Then firefighters in full protective gear entered and appeared to take samples from the floor using swabs. The meeting didn’t resume until 4 p.m.

Hui later described the contents as a rotten plant, and said he wanted Leung to feel and smell the rotting of “one country, two systems” and Hong Kong’s civilization. “I wanted him to taste it, unfortunately it (fell) on the ground because I was hit by security guards,” he said.

Sanctions or the freezing of Hong Kong’s special economic status would “let Beijing know it is a must to completely withdraw and stop the implementation of the national security law,” said Wong, who rose to prominence as a student leader during pro-democracy demonstrations in 2014.

Chinese foreign ministry spokesperson Zhao Lijian said ahead of Pompeo’s announcement that China would take necessary steps to fight back against any “erroneous foreign interference in Hong Kong’s affairs.”