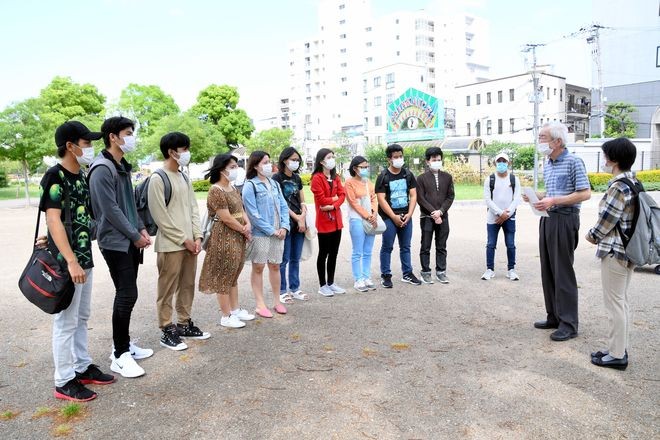 Students from Myanmar listen to an explanation about the government’s emergency relief payout program by the head of a citizens group in Kobe on May 24. (Asahi Shimbun file photo)

The government’s emergency relief program to hand out cash to college and university students facing financial hardship due to economic repercussions from the new coronavirus pandemic includes one questionable condition for eligibility.

Financially troubled foreign students are also entitled to the program, but only if they are scoring good grades at school. There is no such condition for their Japanese peers.

The program offers lump sums of 100,000 yen ($928) or 200,000 yen, depending on the severity of the recipients’ financial straits. Students of universities and technical colleges who live away from their parents and cover much of their tuition and living expenses with money earned from part-time jobs are eligible for the relief payments.

The education ministry tries to justify the special eligibility requirement for foreign students by arguing that since the funds are not provided to all students, the program cannot win public support unless it limits the scope of foreign recipients. But this special condition can be viewed as an unfairly unfavorable treatment of foreign nationals. The ministry should immediately retract this requirement.

Behind this problem seems to be the ministry’s desire to differentiate foreign students who have actually come to Japan to work under the pretext of study from serious foreign students.

To be sure, there have been constantly cases of foreign students who are working illegally or go missing while still enrolled and start staying in Japan illegally. These cases represent a serious social problem.

But the flip side of this problem is the reality that Japanese society has been using foreign students as convenient cheap labor.

The government’s policy efforts to increase the number of foreign students in Japan with a goal of 300,000, launched about a decade ago, have, in a way, also contributed to the trend.

While many countries have excluded foreign students from those eligible for emergency relief measures, the Japanese government should be praised for deciding to offer the cash also for foreign students, including those learning at Japanese language schools.

But the unnecessary requirement could devalue the gesture by leaving the government’s stance toward human rights open to question and disappointing young foreign nationals interested in Japan.

Another eligibility condition for foreign students is that they have attended at least 80 percent of their classes during a month. This should exclude students who are in Japan and working rather than studying. If necessary, applicants' credit-earning records can also be considered.

In response to criticism from the public and opposition parties over the issue, the education ministry has repeatedly said that even foreign students failing to meet the academic performance criteria can apply for the program if their schools deem them to be in need of the relief. This further undermines the rationale for the requirement.

The ministry should rather focus on expanding the relief for students hard-pressed for money to continue studying.

The local governments of Tokyo, Osaka Prefecture and the city of Kyoto, for instance, are hiring students for short-term part-time jobs to process growing paperwork for measures related to the coronavirus.

Masayuki Kobayashi, a professor at J.F. Oberlin University and expert in scholarships, has proposed a program to allow students to delay tuition payments until after graduation. Under this system, the government would pay tuition on behalf of hard-pressed students who would repay the money after graduation in ways that suit their income situations.

While this measure would require the government to increase its spending for the time being, much of the money would eventually be recovered. The idea is likely to win the support of many taxpayers.

Policy efforts to support students struggling to continue their study regardless of their nationality would undoubtedly help develop human resources valuable for Japan’s future and increase the number of friends of our nation.