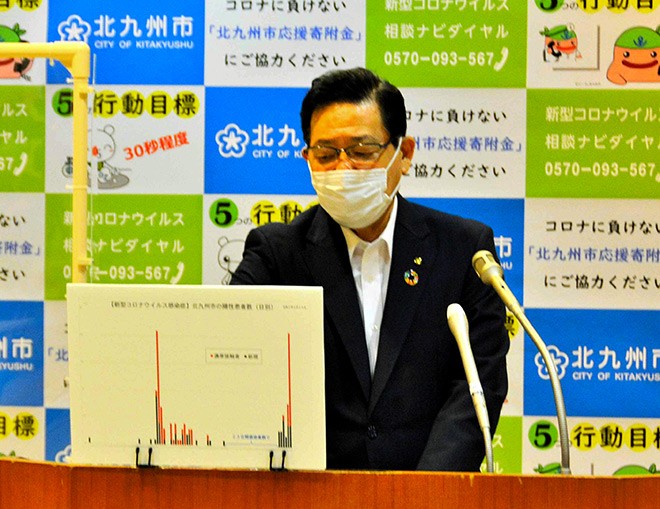 Kita-Kyushu Mayor Kenji Kitahashi states that the southern city is in the grip of a second wave of COVID-19 infections at a May 29 news conference. (Kei Yoshida)

The southern city of Kita-Kyushu announced it is in the grip of a second wave of COVID-19 infections with a record 26 new cases in a single day, triggering alarm not only there but in surrounding cities.

Mayor Kenji Kitahashi stated bluntly at a May 29 news conference, “We are in the midst of a second wave.”

Over the past week, the city confirmed 69 cases of infection, a turnaround from the situation that prevailed from April 30 to May 22, when there were no new cases.

Kita-Kyushu had planned to resume a normal schedule at its city-run schools from June 1, but that is now on hold. Instead, children attending city schools will continue with the current program of only going to classes during the morning.

This is because a student at a city-run junior high school was one of the 26 new COVID-19 cases confirmed on May 29.

But there were also indications of cluster infections in Kita-Kyushu, a city with a population of about 940,000.

Ten of the 26 confirmed cases were among residents and staff at a retirement home, which Kita-Kyushu city government officials said suggests a cluster infection.

Suspicions of a cluster infection were raised May 28 for the Kita-Kyushu General Hospital, and the following day the medical facility reported nine more infections, bringing the total number of infected patients and staff to 14.

Indications of a second wave in Kita-Kyushu have upset the plans of the Fukuoka prefectural government, which initially had considered lifting restrictions June 1 on bars and restaurants where staff are in close contact with customers, as well as other businesses.

But with the latest development, it was decided to leave those curbs in place for Kita-Kyushu.

But in other municipalities where businesses were clamoring to be allowed to resume their operations, the restriction will be lifted.

Although it has a larger population than Kita-Kyushu, Fukuoka city will be among those municipalities as it reported only one new infection during the period Kita-Kyushu had 69.

Residents of Kita-Kyushu will be asked to continue to refrain from going out unless absolutely necessary. Residents of other municipalities will be allowed to resume a pre-crisis lifestyle, but urged to think twice about going to Kita-Kyushu.

A Fukuoka city government official noted that many businesses in the city had been gearing up to reopen their doors on June 1. For that reason, the prefectural authorities were asked to avoid announcing measures covering the entire prefecture.

A Fukuoka prefectural government official expressed fears a major backlash from the public could have resulted had the request to businesses been extended on a prefecture-wide basis, especially from areas with few or no infections.