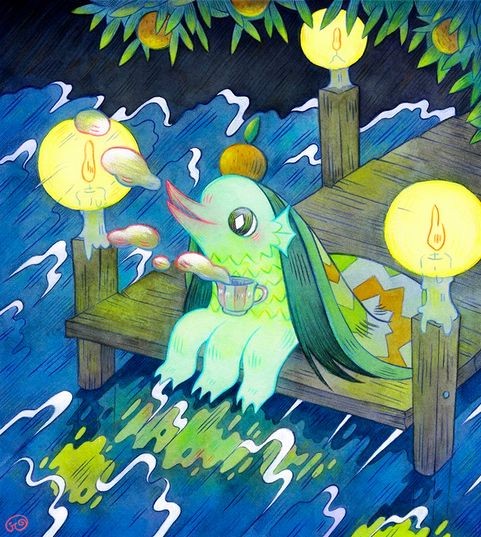 An image of Amabie posted on Instagram (@irart_ilariaricci) by Ilaria Ricci in Italy, which is also shared on Twitter (@Poggibonsa) (Provided by Ilaria Ricci)

A Japanese feudal-era folklore sea monster with the power to fend off plagues has gone viral as the world continues to grapple with the COVID-19 pandemic.

People in countries as far away as Italy and Mexico have taken to sharing colorful depictions of the supernatural mermaid-like “yokai” called Amabie on social media with hashtags such as #amabiechallenge and #amabie.

Who better to talk to than noted yokai scholar Masanobu Kagawa of the Hyogo Prefectural Museum of History in Himeji, Hyogo Prefecture, to explain the phenomenon?

Kagawa, 50, got his doctorate with a thesis on yokai, earning him the nickname "Doctor of Yokai." He offered his thoughts on the sudden fuss behind the previously lesser-known yokai during an interview with The Asahi Shimbun.

Question: Posting images of Amabie seems to have taken the world by storm. Overseas media view the trend as an example of unity among people trying to overcome the health crisis.

For example, people in Italy sing songs in chorus from their windows and in Britain, people place paintings of rainbows in their windows. However, Amabie had remained relatively unknown, even in Japan until recently. What kind of yokai is it in the first place?

Kagawa: Amabie is a yokai that is said to have emerged from the sea in Higo province (modern-day Kumamoto Prefecture) in 1846.

According to a "surimono" (a printed material that practically doubled as a newspaper and a talisman) kept at Kyoto University Library, Amabie said: "There will be a good harvest for the next six years, but in exchange, there will also be epidemics. So, draw a picture of me and show it to people."

And with that, it disappeared. Based on this and other documents, Amabie emerged to tell people to share its image as a means of warding off plagues. It appeared in an animated adaptation of (horror manga) 'GeGeGe no Kitaro,' so it was well known among yokai enthusiasts.

Q: Amabie has long hair, a beak-like mouth, a scaly body and three hairy legs. Why do you think Amabie attracts so many people, given its odd appearance?

A: I think there are three key points to answer here.

Firstly, it resurfaced exactly as the new coronavirus is raging.

Secondly, the fact that Amabie told people to draw a picture of itself and show it to others sits well with the current trend in media when people draw illustrations in any way they want and post them on social networking websites for others to see.

And thirdly, Amabie's design itself. When you look at it for the first time, it's hard to believe that it was drawn during the Edo Period (1603-1867)."

Q: Its absent-minded expression is similar to that of modern-day "yuru-chara" local mascots with unsophisticated designs, don't you think?

A: It doesn't look scary enough, or I should say, it is poorly drawn but with a certain quality, making it look exactly like a yuru-chara. I think it goes well with modern aesthetics, which perhaps explains its popularity.

A: There are some examples also in the West to portray the black plague and other epidemics as something similar to yokai. The origin of the English word "monster" derives from the Latin word "monstrum," but in addition to the meaning of monster, monstrum means "warning" and "foretelling."

Q: Why do you think Amabie has suddenly garnered worldwide attention?

A: I think it is probably play rather than exorcism or faith. I don't think the people who post images on social media believe they can fend off the disease by drawing Amabie.

But when people have to stay home as part of measures to help prevent the spread of the virus, they have to find some sort of recreational activity to get through.

They draw images of Amabie from their imagination and share them with others on social media. I think this distraction, so to speak, has been accepted as a form of play.