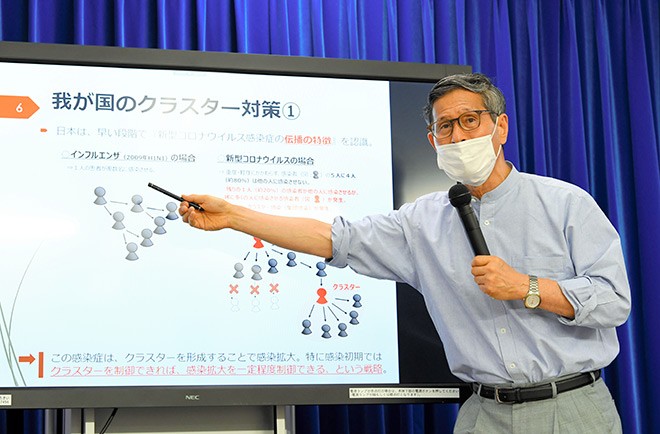 Shigeru Omi, vice chair of a government expert panel on the coronavirus, makes a point using a board at a news conference in Tokyo on May 29. (Reina Kitamura)

A government expert panel on the response to the coronavirus did not take minutes of its meetings, which critics say greatly hampers public scrutiny of the officials' handling of the pandemic.

The lack of records is the latest example of shoddy record keeping under the Abe administration, which has been repeatedly criticized for not making them accessible to the public. It also violates a government pledge to keep detailed records of the proceedings.

On May 28, Risfax, an industry-specific paper covering the health care and pharmaceutical industries, reported that the Cabinet Secretariat denied its request for minutes of the panel’s meetings, saying they “do not exist.”

He said minutes are not required of expert panel meetings as they are considered a forum where “government policy measures are neither decided nor approved,” citing official guidelines for managing public documents.

Suga said instead that summary of minutes that do not identify the speaker has been released regarding panel discussions.

In March, the government designated the spread of the new coronavirus as a “historic state of emergency,” the first such designation under the guidelines for managing official records.

The government adopted a policy to appropriately produce, preserve and manage records on the pandemic.

But critics were skeptical about whether thorough records would be produced after the designation as there was ample wiggle room for the government to decide to what extent.

The government is obliged to produce detailed minutes of a meeting if a policy measure is decided or approved there.

But if a decision or approval is not involved at the meeting, the content of records can be limited to such matters as the status of progress in activities and confirmation items.

In addition to critics, some expert panel members disagreed with the government’s stance of not keeping detailed records of their discussions.

Shigeru Omi, vice chair of the expert panel, said at a news conference on May 29 that opinions were voiced for creating minutes that included the names of the members who made the comments during the session earlier that day.

In March, health minister Katsunobu Kato pledged to produce detailed records on the discussions that took place at the expert panel.

“Records of the first three meetings will be on the outline of the discussions, but those on the fourth meeting and afterward will keep every single word of the panelists by enlisting a stenographer,” he said at a March 2 session of the Upper House Budget Committee.

It was pushed by the then main opposition Liberal Democratic Party and Komeito, which both criticized the administration of the then ruling Democratic Party of Japan for its failure to keep records on its decision-making process at that time.

Yukio Edano, leader of the opposition Constitutional Democratic Party of Japan, was then chief Cabinet secretary, in charge of measures to deal with the 2011 disasters.

Now, Edano describes the absence of minutes of the expert panel's meetings as outrageous.

“It is out of question that crucial records of the expert panel's meetings were not produced,” he said.

Sessions of a panel comprising experts are categorized into those of councils and similar entities under separate government guidelines for managing administrative matters.

Yukiko Miki, head of the nonprofit organization Access-Info Clearing House, noted that under those particular guidelines, records of meetings of a panel of experts are required to be produced, regardless of whether they fall under a “historic state of emergency.”

“But the government is now arguing that it became exempt from creating records during the historic state of emergency although it is required to do so during normal times,” she said.

(This article was written by Amane Sugawara and Junya Sakamoto.)