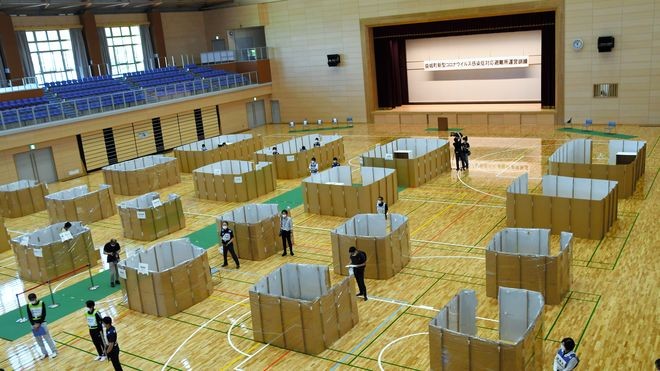 At a gym designated as an evacuation center, cardboard partitions are set up to prevent the spread of infections and protect privacy on May 24 in Mashiki, Kumamoto Prefecture. (Rieko Ohki)

Japan is entering the rainy and typhoon season, when the nation is often hit by floods.

This year, the challenge of responding to floods will be further complicated by concerns about the new coronavirus. The concept of “self-help,” which in this context means protecting one’s own life, is more important than ever under the current circumstances.

We all need to reassess the disaster risks around us and prepare for possible emergency situations.

When an evacuation order was issued in March in Shibecha, a town in Hokkaido, in response to torrential rain, local residents flocked to a gym operated by the municipal government and designated as an emergency evacuation center.

When local government officials guided the evacuees to locations within the facility to ensure sufficient distancing between people, the gym could accommodate only about 200 evacuees even though it is designed to accept 500 in such an emergency.

The situation forced the municipal government to hastily open another evacuation site.

Usually, space given to each person in an evacuation center is slightly less than 2 square meters. If a distance of 2 meters has to be secured between people, the number of evacuees that can be accommodated by a center drops by more than half.

Last month, the government urged local authorities around the nation to increase evacuation centers and seek cooperation from hotels and Japanese inns to boost local emergency evacuation capacity during the outbreak.

But renting private-sector facilities would incur no small costs. Local governments have to pay for the rooms they have reserved for evacuation even if they are not used because the damage is limited.

The government should support such efforts by local administrations by pledging to subsidize the costs.

We can also do our part for the cause by arranging for our own evacuation to avoid ending up in a dangerous “sanmitsu,” or “three C’s,” of a confined environment where many people gather closely together and come into close contact with each other.

To do so, you first need to know more about the risks in your neighborhood. Check the hazard map published by the local government to see whether your home is located within an area at risk of being flooded during heavy rain.

If your home is not within such a high-risk area or if you live on an upper floor of a sturdy high-rise condominium, you can consider remaining at your home. Alternately, you can also weigh the option of taking refuge in the home of a friend or a relative that is in a safer situation.

You can also opt to sleep in your car for a short period of time and secure a parking place in a safe area.

The point is to figure out the best way for you and your family to take refuge from a possible flood while avoiding the risk of catching the virus as much as possible.

Still, there is no ruling out the possibility that local evacuation centers could be packed with evacuees. This is a situation that should be averted through really effective preparations by the local government.

In Minamiboso, Chiba Prefecture, many houses were seriously damaged by Typhoon No. 15 last autumn. The municipal government plans to set up many tents in gyms designated as evacuation centers to ensure proper social distancing between evacuees.

It will also secure separate rooms and dedicated toilets in case some evacuees are found to have fevers.

The Kanagawa prefectural government has signed an agreement with a nonprofit organization led by architect Shigeru Ban for the supply of partition curtains and other products to prevent the spread of infections and protect privacy within evacuation centers.

The government of Tokyo’s Adachi Ward, where more than 30,000 residents took refuge in evacuation centers during Typhoon No. 19 last year, is working on an operational manual for employees in charge of running such facilities. The manual will include measures to prevent the spread of the virus, including installing a reception register in each evacuation center so that the evacuees can be contacted later.

All these ideas are useful for other local governments as well. But it can take time to secure a sufficient supply of partition curtains and other necessary products. Local governments need to realize that they should make such preparations well in advance.

There is no telling when the nation will be struck by a second wave of coronavirus infections. It cannot be stressed too much that emergency evacuations during the pandemic will pose various unusual challenges that require new approaches.