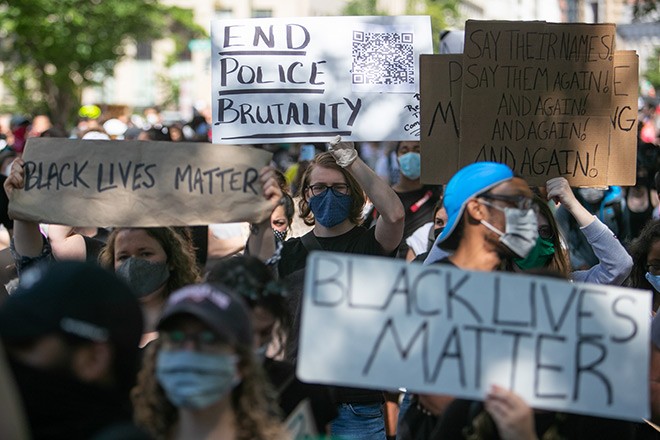 Protesters gather around the White House on May 31 after the death of George Floyd in Minnesota. (Photo by Yuko Lanham)

In the United States, the name Karen has lately become social media shorthand for a white woman who typically demands to “speak to the manager” or threatens to “call the head office” when she feels she has been wronged at a store or restaurant.

A black man asked her to put a leash on her dog in the park, in keeping with the regulations. Enraged, she called police on the spot, claiming she was being threatened by an African-American man.

Social media reacted with outrage to her overemphasis on the man’s ethnicity. The woman has since been fired from her job.

A tsunami of protests and riots has been sweeping through the United States, after George Floyd, a black male, was killed in Minnesota while he was being restrained by police on May 25.

Video footage shows Floyd handcuffed and lying face down on the ground while a police officer kept his knee on Floyd’s neck, heedless of his repeated pleadings that he couldn’t breathe.

The shocking brutality of this scene leaves me speechless.

The accumulation of many years of racist injustice has formed multiple strata in American society, so to speak.

Twenty years ago, I was reporting on site after a young black man was shot to death by a white police officer.

“You’ll never, ever understand the reality of racial discrimination,” I was told by someone taking part in a demonstration against the incident.

“Racism in America is like dust in the air,” basketball Hall of Famer Kareem Abdul-Jabbar, 73, noted in an op-ed piece contributed to the Los Angeles Times. “It seems invisible--even if you’re choking on it--until you let the sun in. Then you see it’s everywhere.”

He also wrote, “The racism virus infecting the country is more deadly than COVID-19.”

I think of the frustration of demonstrators in face masks, compelled to come together and raise their voices in protest.

Looting and arson can never be condoned. Yet, their sense of desperation is all too real--that they themselves will not be able to breathe unless they rise up now.

We should not view this as someone else’s problem that has nothing to do with us.