EDITORIAL: Detailed records must be kept to assess response to virus outbreak 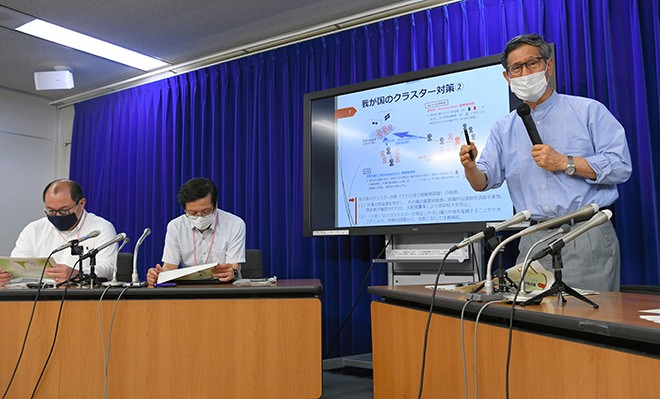 Shigeru Omi, right, vice chair of the government’s expert panel on the novel coronavirus, speaks at a news conference in Tokyo on May 29. (Asahi Shimbun file photo)

How should the government act to protect the lives and livelihoods of the public from outbreaks of infectious diseases?

To answer this, it is important to keep detailed records of government responses to the novel coronavirus pandemic so that the policy decisions can be assessed effectively to glean lessons for the future.

Despite its characterization of the outbreak as a “historic emergency situation,” the Abe administration has failed to keep records of important discussions on how it has dealt with the crisis.

This can only mean the administration does not yet fully grasp the importance of public document management.

It has been revealed that no formal minutes have been kept of the meetings of the expert panel advising the government on its responses to the COVID-19 outbreak.

While the government has produced excerpts of the panel’s discussions without identifying the speakers, there are no official records of the remarks made at the panel’s meetings for making informed evaluations of related policy decisions.

The guidelines for official document management stipulate that minutes should be taken of any meetings where policy decisions are made or approved. The government claims as the advisory panel meetings do not fall under this category, there is no need to take minutes.

This stance reflects disregard for the value of official records in general as it is based on a very narrow definition of the meetings subject to this requirement. It also contradicts the remarks about the issue made in a March Diet session by health minister Katsunobu Kato, who then pledged to use stenographers to record “every single word uttered” at the panel meetings.

These experts are tasked with analyzing the latest situations concerning the infection and making recommendations accordingly. They are all also members of the government’s advisory council to discuss basic policies for responding to the pandemic.

Even if policy decisions are not made or approved at the meetings, it can be safely said that they play a very important role in guiding the government’s responses to the crisis.

Abe himself has often referred to “the opinions of the experts” as grounds for his policy decisions while explaining them at the Diet or in news conferences.

The government has said the members of the panel feel more comfortable about expressing their views and opinions when the speakers are not identified.

As some members have started calling for minutes to be kept of their meetings, however, Chief Cabinet Secretary Yoshihide Suga said the government will obey any decision by the panel on this issue, in a sudden shift in stance.

There are stenographic records, if not audio recordings, of the meetings available, according to the government. If so, it should immediately start compiling the minutes.

To secure broad public understanding and cooperation for its policy efforts to contain the virus, the government needs to win the solid trust of the people. This requires the government to actively disclose relevant information to inject a convincing transparency into the decision-making process.

A report compiled by the health ministry’s review panel that scrutinized the government’s responses to the outbreak of a new influenza in 2009 stressed the importance of providing sufficient and accurate information to the public.

It called for “taking steps to secure transparency when seeking opinions from medical and other experts (through formal meetings and other means), including taking minutes.”

The measures to deal with the outbreak restrict the freedom and rights of many people and bring huge consequences for the nation’s economy and society.

The public deserves to know how the government made policy decisions concerning the pandemic and what kind of information it used in doing so.

The Abe administration has a responsibility for making and keeping detailed records of not only discussions at the expert panel but also other discussions and communications involved, including informal talks and exchanges among Cabinet members and those between the government and the ruling coalition.

Such records will be vital for a comprehensive review of the way the government handled the latest public health crisis.