A temple and an adjacent shrine on Chikubushima island in Lake Biwako, Shiga Prefecture, are thought to have been constructed from a gorgeous bridge at Osaka Castle, which was built by warlord Toyotomi Hideyoshi. (Jiro Tsutsui) 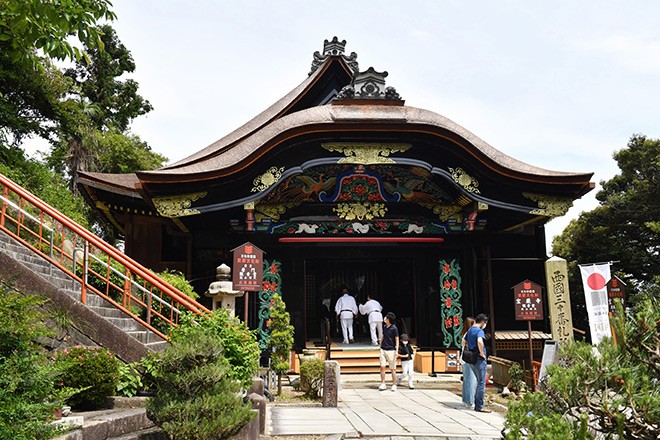 The Karamon gate of Hogonji temple in Nagahama, Shiga Prefecture, on May 30 after repair work was completed (Sayuri Ide)

NAGAHAMA, Shiga Prefecture--An island on Lake Biwako is giving up its last secrets. It emerges that a temple and an adjacent shrine there were likely constructed from a bridge that was part of feudal warlord Toyotomi Hideyoshi's Osaka Castle.

Prefectural authorities said construction techniques in the temple and shrine complex bear characteristics that Hideyoshi, who was fond of grand displays, is known to have favored.

Researchers labeled them hugely valuable as Osaka Castle and all of its main structures were burned to the ground during the summer Siege of Osaka in 1615.

Two of the five structures on Chikubushima island, Hogonji temple's Karamon gate and the main building of Tsukubusumajinja shrine, are both designated as national treasures. Three other structures, the temple’s Kannondo hall and two connecting corridors, are designated as important cultural properties.

The four structures of the temple were originally constructed in 1603 at the behest of Toyotomi Hideyori, one of Hideyoshi’s sons.

The island is located off the coast of Nagahama, where Hideyoshi became lord of a castle for the first time. This explains the deep roots that tied Hogonji temple to the Toyotomi family.

In its time, Osaka Castle's Gokurakubashi bridge is believed to have been adorned with a gorgeous roof.

According to written records from the 17th century, the bridge was moved to Toyokunibyo, the mausoleum of Hideyoshi, and reconstructed there before being relocated again to Chikubushima island and used to create the Karamon gate.

This is the first time for research to be carried out to confirm whether the relocation and reconstruction projects actually occurred.

The five structures are located next to each other.

Shiga Prefecture examined the buildings during repair work on the four of the temple structures between 2013 and 2020.

Researchers found three similarities among the five structures with regard to a complicated method known as “kumimono,” the upper part of pillars that hold up the eaves.

WHAT THE STRUCTURES HAVE IN COMMON

Measurements of materials used in kumimono work for the Karamon gate and Kannondo hall are all same, and their round surfaces were finished in the same manner. The shape of the kumimono in the main building of Tsukubusumajinja shrine and the temple’s connecting corridors was same as well.

“There are no other possibilities than they were built to a same design under the supervision of the same master carpenter,” said an official of the prefectural government’s cultural properties protection department.

Researchers also discovered that the same patterns and color combinations were used to paint kumimono portion of the structures, although they had faded.

They also found holes apparently made when nailing down gold-leafed openwork metal ornaments, which all bear the same shape.

Researchers concluded that the five structures almost certainly originated from a single structure, the bridge.

“The style of the five structures is luxurious and typical of the splendid designs of the Momoyama Period (late 16th century), so we can assume that Hideyoshi oversaw the work (of the bridge),” a prefectural official said.

The bridge was probably sawed into separate parts and remodeled to fit the geographical features of Chikubushima island when the relocation work started.

Paint work on the four structures now shows the vivid colors of their original appearance when they were moved to the island and reconstructed.

A ferry is the only way to reach Chikubushima island from Nagahama Port in Nagahama city or Hikone Port in Hikone city, both in Shiga Prefecture. The operation of ferries to the island has been reduced to twice a day at each port as a precaution against the novel coronavirus outbreak.