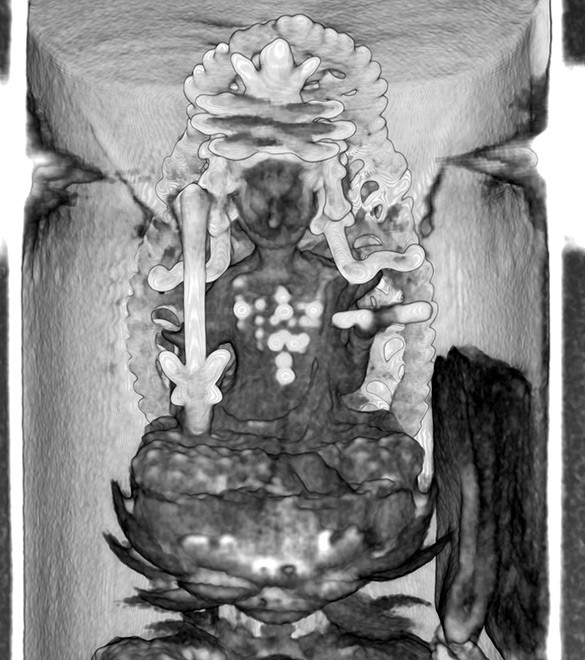 NARA--CT scans revealed a miniature Monju-bosatsu-kishizo statue hidden inside a 14th century one that is designated by the government as an important cultural property of Japan and kept at Daichiji temple in Kizugawa, Kyoto Prefecture.

The newly discovered work of art was announced June 1 by the Nara National Museum.

Daichiji temple belongs to the Shingon Ritsushu sect, and is a branch of Saidaiji temple here. The temple is closely associated with the monk Jishin (1231-1316).

It is said that Jishin learned from the monk Eison, known as the father of restoring Saidaiji temple, and helped to build Kyochuji temple, established in 1318, Daichiji's predecessor.

The principal image Monju-bosatsu-kishizo statue was said to be made from part of a wooden pillar for a bridge build over the Kizugawa river by noted monk Gyoki during the Nara Period (710-794).

The museum conducted CT scan research on the principal 169.5-centimeter-high statue in February and found the miniature one, measuring 2.7 cm (excluding Shishi lion part) inside the neck portion.

The miniature statue was in a small wooden Buddhist altar called “zushi,” and wrapped in a drawstring bag of cloth.

Scrolls and Buddhist scripture were also found inside the statue’s body part, along with a mantra written on the paper in which they were wrapped.

X-ray normally do not reveal letters written in “sumi” black ink. Fortunately, the script was visible because the letters were written with red lacquer and gold paint made of a mix of animal glue and powder.

Ryusuke Yamaguchi, the museum's chief researcher who specializes in the history of sculptures in Japan, headed the research. He noted it was possible the miniature Buddha was a “nenjibutsu,” or small statue of Buddha, that Jishin carried with him.

“The miniature statue shows his faith for Gyoki and Monju-bosatsu,” Yamaguchi said. “There are other cases of statues found inside Buddha statues, but it is very rare to find they were placed in such a careful manner, like inside the small Buddha altar and a drawstring bag.”

Yamaguchi speculated that people mourning Jishin’s death just before the temple was completed arranged for this personal belonging to be placed inside the statue after his death.

The statue is on display at the museum's Nara Sculpture Hall, which reopened June 2.

The facility is closed on Mondays. The opening hours will be shortened to between 10:30 a.m. and 4 p.m. by July 3.