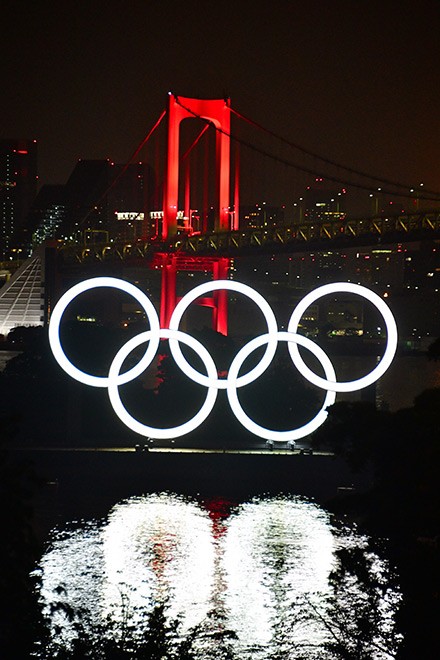 Lighting on Rainbow Bridge in Tokyo’s Minato Ward changes from rainbow to red on June 2, after Governor Yuriko Koike issued a Tokyo alert for a possible second wave of COVID-19 infections. (Kotaro Ebara)

Just after 11 p.m. on June 2, the Tokyo metropolitan government building in Shinjuku Ward changed from rainbow colors to red, a sign that a second wave of COVID-19 infections could be coming.

Officials in the towering building pointed to nearby nightlife districts as one reason for the decision.

About an hour earlier, Tokyo Governor Yuriko Koike declared the first “Tokyo Alert” for a possible resurgence of the virus in the capital.

That day, Tokyo reported a spike of 34 new infection cases, a daily level not seen since mid-May.

Officials had seen some warning signs.

The ratio of patients whose sources of infection are not known jumped to 57.6 percent on May 27, the day after the metropolitan government started easing restrictions on businesses and facilities.

Some officials at that time said it was not difficult to know the sources of these infections. They suspected many of the patients became infected at businesses in entertainment and red-light districts in Tokyo.

Of the 114 newly infected people in the week until June 2, about 30 percent, or 32, were connected to nightlife businesses, such as clubs and bars where women serve and entertain male customers.

Some of the infected individuals were employees of such businesses that had remained open despite government requests to shut down.

About 40 percent of the 32 people are believed to have been infected in Shinjuku Ward, an area known for its nightlife.

“I will issue a Tokyo alert on the basis of discussion with experts,” a stern-looking Koike said during a task force meeting held before 10 p.m. on June 2.

Officials were initially reluctant to issue the alert.

The state of emergency over the coronavirus crisis was lifted in Tokyo on May 25, and Koike on June 1 declared that Tokyo had moved into “Step 2” of a three-stage road map on easing business and other restrictions imposed during the pandemic.

Seven factors are weighed on issuing the alert, including the number of patients in severe condition or receiving in-hospital care, and the rate of positive polymerase chain reaction (PCR) tests.

To be in the “safe” zone, the average daily number of new infections in a week must not exceed 20, while the weekly average ratio of patients whose source of infection cannot be tracked must be less than 50 percent, officials said.

In Step 1 of the Tokyo government’s road map, museums and libraries were allowed to reopen on May 26.

Step 2 lifted government-requested restrictions on the operations of many commercial facilities, such as gyms and movie theaters.

Officials feared a delay in the reopening process would further damage the already hard-hit economy.

But the virus has apparently spread from nightlife districts, particularly in the Shinjuku area. Officials are now worried that it could reach other parts of the metropolis, emulating a pattern seen in late March.

“I hope we achieve a good balance between infection prevention measures and social and economic activities,” Koike said at the task force meeting.

Kenichi Yoshizumi, the mayor of Shinjuku Ward, asked for understanding from the public regarding the difficulties of tracing the source of the new infections.

“If a person who works at a restaurant or bar in (nightlife districts) tests positive and the public learns about it, the particular business will be affected negatively,” he said.

Yoshizumi said that under those circumstances, patients and their employers might be reluctant to cooperate with health officials.

“We need to strengthen measures to prevent the virus from spreading while working to eradicate discrimination,” he said.

(This article was written by Chiaki Ogihara and Ryo Oyama.)