Masako carries on tradition of sericulture at Imperial Palace 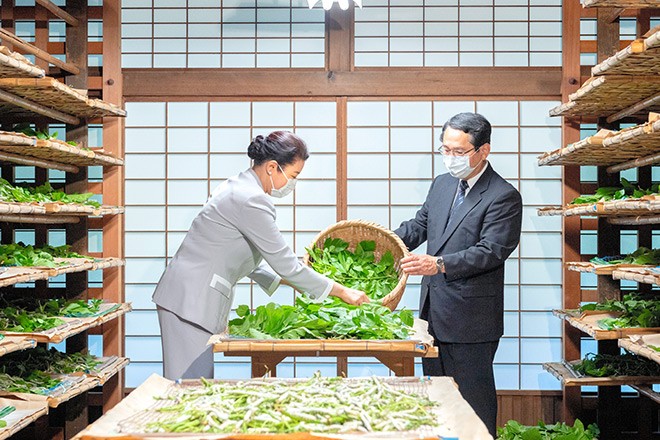 While many citizens have been figuratively cocooning during the COVID-19 pandemic, Empress Masako has literally been engaged in the practice, helping to raise silkworms at the Imperial Palace in Tokyo.

Masako is carrying on a tradition with a thread said to date back 15 centuries, the Japanese imperial family's cultivation of silkworms to produce exquisite silk.

With the start of the Reiwa Era in May 2019 when Emperor Naruhito ascended the Chrysanthemum Throne, Masako took over silkworm-raising duties from her mother-in-law Empress Emerita Michiko.

On May 29, Masako fed mulberry leaves to silkworms kept at the Momijiyama Imperial Cocoonery, to which she commutes from the Akasaka Imperial Residence.

Mention of the imperial family's involvement with sericulture appears as far back as the “Nihon Shoki” (Chronicle of Japan), compiled more than 1,000 years ago, which refers to Emperor Yuryaku in the fifth century recommending that his empress begin sericulture.

The first modern empress to take up sericulture was Empress Dowager Shoken, wife of Emperor Meiji. At that time, silk exports had become an important industrial sector in Japan and the empress took the lead in encouraging further efforts in the field.

That tradition has been passed down for the past 150 years, with all successive empresses taking a leading role in sericulture.

The imperial family today still relies on practices established a century ago to raise silkworms, meaning there is no air conditioning in the cocoonery and the silkworms are not given artificial feed.

Normally, a sericulture expert and several assistants who have graduated from agricultural high schools spend about two months at the cocoonery taking care of the silkworms after they hatch until the gathering of the cocoons.

But the novel coronavirus pandemic has forced a number of changes to that plan and this year the sericulture expert has been left at the cocoonery without the help of assistants.

While four types of silkworms, including a hybrid of Japanese and Chinese varieties, are raised in ordinary years, this year only the indigenous Koishimaru variety is being raised.

The collected silk has been used in imperial ceremonies or as gifts. The silk weaved under Michiko’s watch was used to recreate silk products of the Nara Period (710-784).

In May 2018, when she was still crown princess, Masako visited the imperial cocoonery for the first time along with Naruhito and their daughter, Princess Aiko. At that time, Masako learned directly from Michiko what her sericulture duties entailed.

Masako, who took care of reptiles as part of a school club activity when she was in elementary school, is long known for her love of animals.

She has lent a hand raising silkworms since Aiko took part in a project during her days at Gakushuin Primary School and raised silkworms at home, according to high-ranking Imperial Household Agency officials.

Naruhito visited the cocoonery on June 2 and remarked to Masako how cute the silkworms were as he helped her take care of them.

An agency official said Masako was carrying out her duties in a sincere manner because “she has a strong sense of wanting to take care of Japanese traditions.”