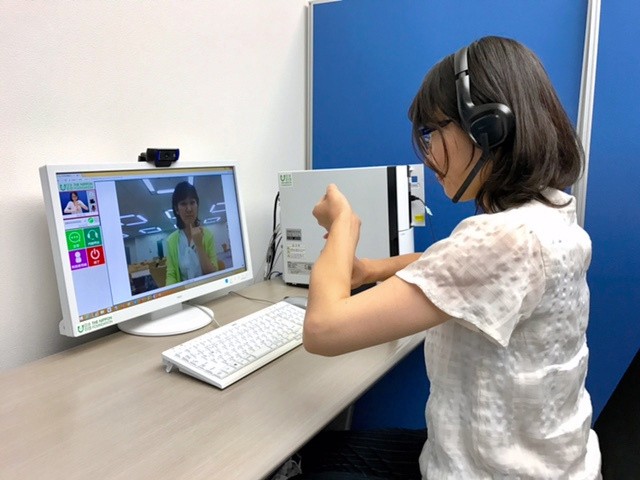 An operator interprets a sign-language message from a hearing-impaired client in real time and relays it over the phone. (Provided by the Nippon Foundation)

Japan is working toward introducing a public service next April that allows people who are deaf or hard of hearing to place calls at any time via online assistants.

Among the Group of Seven nations, Japan is the only country that has yet to set up a public mechanism to offer “barrier-free” access to phone services.

A bill to make the telephone relay service publicly available passed the Diet on June 5. The government plans to have the system running in fiscal 2021.

The service will also allow those with auditory problems to make emergency calls to police and fire stations.

But it will still need to develop a plan that would ensure businesses and other entities receiving calls know what it is and how it works when they pick up the phone.

Under the system, people with hearing difficulties will be able to send messages in sign language or text using computers or smartphones, which will then be interpreted by operators in real time so those on the other end of the call can understand them.

The Tokyo-based Nippon Foundation has been providing a relay service on a trial basis since 2013, but the program will be terminated this fiscal year.

According to the Nippon Foundation, it had 10,500 people registered under its program as of September 2019. A total of 28,000 calls are made monthly using the system so people with hearing issues can do things such as making reservations and appointments with stores and hospitals, and rescheduling parcel deliveries.

That system has some major drawbacks, though. It cannot be used for emergency calls, and it is not available 24 hours a day, 365 days a year.

Under the public service, an agent commissioned by the central government will be available to relay calls at any time and at the same cost as ordinary calls. People will also be able to use it to phone those with hearing issues.

But the new service will have to deal with the same obstacles the privately run program has faced.

The Information Gap Buster, a nonprofit organization in Yokohama, conducted a survey covering 126 users of the Nippon Foundation program in April.

Forty-four percent of respondents said their calls have been rejected because people on the other end of the calls demand they come on the line in person, instead of operators.

Of those users, 70 percent tried to contact banks or credit card service providers but failed to ID themselves via operators.

Only 3.4 percent of all 1,304 financial institutions across the nation were ready for the relay service as of March 2019, according to the Financial Services Agency.

Yoshihiro Ito, chairman of the Information Gap Buster, who has been deaf since birth, said the people picking up the phone often do not understand what the relay service is.

“In one case, it took no less than 30 minutes to brief the receiver on the service before getting into the main topic of the call,” Ito said.

He said the service is often mistaken for crank and nuisance calls.

Ito said private businesses will need to cooperate and learn how to process calls under the system to be socially responsible establishments.

“It would not be possible for hearing-impaired people to make calls in the same way as others if social obstacles remain,” he said.