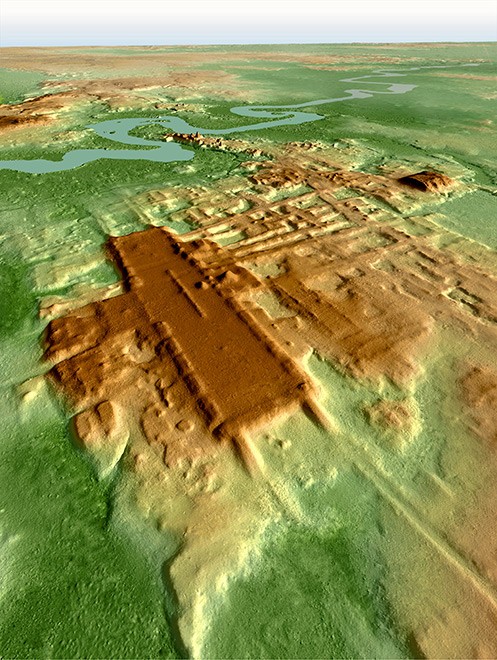 A 3-D artist’s rendering of the site of Aguada Fenix. The rectangle platform, front, is likely the largest structure of the Mayan civilization. (Provided by Ibaraki University professor Kazuo Aoyama)

An international research team has discovered what is likely the largest structure built by the Mayan civilization in southern Mexico, which it says may help reshape understanding of the Mayan people.

The massive structure, discovered at Aguada Fenix in the Mexican state of Tabasco, near the Guatemalan border, is believed to have been built between 1000 and 800 B.C., when no clear social hierarchy had yet been formed.

“The findings show a large-scale collaborative work can be carried out even if there isn’t much social inequality,” said a member of the team, which comprises researchers from Japan, the United States, Mexico and other countries. “It’s a discovery that can transform the conventional view of the civilization.”

The team’s findings were published in the British science journal Nature on June 4.

The team started conducting an airborne lidar survey and field investigations at the site in 2017. In 2018, the researchers discovered Aguada Fenix, an underground site beneath an area of forests and grass pastures.

After conducting further research into the site, the team concluded that the large structure stretches about 1,400 meters in a north-south direction and some 400 meters east to west.

The researchers estimate the total volume of the structure ranges from 3.2 million to 4.3 million cubic meters. They said it exceeds what has been considered the largest structure of the Mayan civilization at another site called El Mirador by more than 400,000 cubic meters.

A flat stylobate spans on the upper side of the structure at Aguada Fenix. Since unused stone axes made of jade were unearthed during an excavation at the site, the team believes the structure was used to conduct communal rituals.

“The structure was made shortly after people started settling there,” said Aoyama. “They may have tried to establish an identity as a community by building a sacred platform.”

Stone sculptures that depict those in power are usually found at other archaeological digs, but none were discovered at Aguada Fenix.

“People might have gathered at the site of their own will and built the structure,” said Inomata.

The Mayan civilization flourished mainly around the Yucatan Peninsula and other parts of the world, including Mexico, Guatemala and Honduras, from around 1000 B.C. through the 16th century A.D.

Pyramids likely used to hold religious rituals and stone monuments with inscriptions of complex Mayan letters on them have been discovered at many archaeological sites of the civilization.