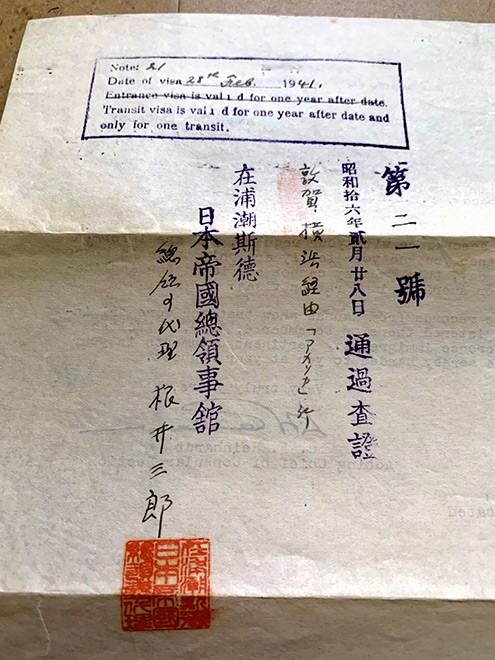 MIYAZAKI--A visa issued by an unheralded Japanese diplomat allowing Jewish refugees to escape persecution by the Nazis during World War II has been found.

An association to honor Saburo Nei, an acting consul-general in the Soviet Union, who issued the visa to a Polish refugee, announced the find on June 2.

Chiune Sugihara, a Japanese diplomat in Lithuania, known as the "Japanese Schindler," is famed for issuing "visas for life" to thousands of Jewish refugees fleeing Europe during the war.

The newly found document shows that Nei also gave Jewish refugees permission to flee to Japan with the visa, which violated the policy of the Foreign Ministry at the time.

The document was found by Tokyo-based freelance writer Akira Kitade, 76, who has been tracing the footsteps of Jewish refugees.

Kitade obtained a photo of the visa from Kim Hydorn, a granddaughter of Simon Korentajer, of Poland.

According to Kitade, Korentajer fled Poland with his wife and daughter when Nazi Germany invaded the country in September 1939, triggering World War II.

The family arrived at Vladivostok and fled to Tsuruga, Fukui Prefecture, under the visa issued by Nei in 1941. Korentajer arrived safely at San Francisco in the United States in August 1947, after spending about six years in Shanghai.

Nei, a Miyazaki native, assumed the post of acting consul-general in Vladivostok in the former Soviet Union in December 1940.

There had been a record of Nei issuing visas to Jewish refugees based on his own judgment, but this marks the first time a document has been found.

“I feel really happy that we have confirmed that Nei performed a humanitarian act by taking a risk,” said Yoku Nei, 78, the head of the Saburo Nei Honoring Association.

The visa shows that Nei issued the document on Feb. 28, 1941, and it permitted the refugees to travel to the United States via Tsuruga and Yokohama in Japan.

As the number 21 was written in the document, Kitade believes that 20 or more such visas may have been issued.

Kitade is currently negotiating with Korentajer's granddaughter to allow the visa to be exhibited in Japan in July.

“I want people to learn there were many people involved in saving the lives of Jewish refugees other than Sugihara,” said Kitade.