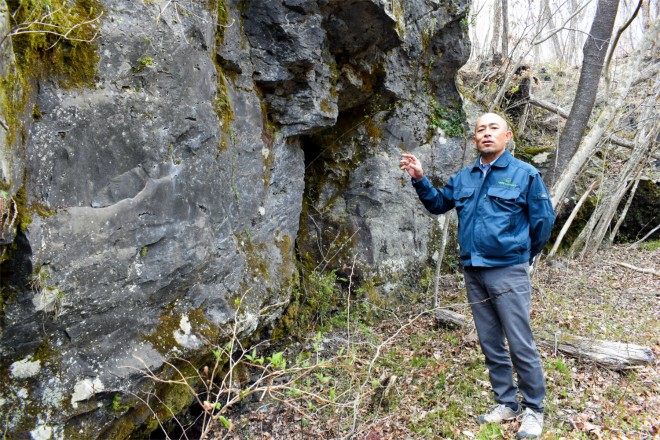 Mitsuhiro Yoshimoto, a senior researcher at the Mount Fuji Research Institute, stands next to an exposed layer of the Takamarubi lava formation in Yamanakako, Yamanashi Prefecture, on April 28. (Katsumi Mitsugi)

YAMANAKAKO, Yamanashi Prefecture--Solidified lava from eruptions of Mount Fuji in the distant past offers frightening clues of what awaits if the sacred mountain blows its top again.

Researchers now are racing to figure out the safest way to evacuate communities at the base of the 3,776-meter-high volcano, and beyond, in such an event.

A lava stream that emerged after Mount Fuji violently erupted 1,300 years ago is currently exposed near an urban area on the west side of scenic Lake Yamanakako, offering a valuable time capsule to study. It also is magnificent natural wonder in its own right.

The formation, part of the Takamarubi lava torrent, is 4 to 5 meters deep. Some sections have eroded over time, but the message is clear: A big eruption spells disaster.

“When lava comes crashing down slopes after an eruption, the inner lava composition remains molten hot while the outside layer cools, so it works like a crawler wheel,” said Mitsuhiro Yoshimoto, 49, a senior researcher at the Mount Fuji Research Institute based in Fuji-Yoshida that is operated by the Yamanashi prefectural government.

Mount Fuji, a hugely popular climbing destination in summer, has remained dormant since the Hoei Eruption in 1707.

The Takamarubi layer had been believed to be a midsize lava formation that resulted from the Enryaku Eruption between 800 and 802.

However, studies of paleomagnetic direction by the research institute revealed that the Takamarubi layer formed after four small-scale lava eruptions in around 580 through 700. The findings were released in 2018.

Lava contains large amounts of a magnetic mineral known as magnetite. Because of that, traces of geomagnetic direction remain in magnetite when molten lava at more than 1,000 degrees cools to less than 580 degrees.

As the direction and strength of geomagnetism constantly changes, data for which is already known, it is possible to determine when a volcanic eruption occurred based on the magnetite content.

Nihon Kiryaku, a historical text that categorizes and chronologically lists events from the Heian Period (794-1185), cites a report from Suruga in what is now Shizuoka Prefecture in reference to the Enryaku Eruption, stating that “the top of Mount Fuji burned itself … the light from lava illuminated the night sky.”

On the other hand, no records of the incident have emerged from the Kai (present-day Yamanashi Prefecture) side of the peak.

Yuki Sugimoto, a curator at the education board of Fuji-Kawaguchiko in Yamanashi Prefecture, is not surprised at the lack of historical materials in this instance.

“If the Takamarubi lava flow was generated between 580 and 700, that means the political system of Kai had not yet been established, which would explain the lack of a historical record,” Sugimoto, 41, said.

The two rounds of pyroclastic flows are estimated to have amounted to 12.4 million cubic meters, the equivalent of 10 Tokyo Domes.

The figure is five times higher than the 2.42 million cubic meters in pyroclastic sediment used as a reference to simulate a possible pyroclastic eruption to draw up a hazard map.

Latest estimates suggest pyroclastic flows from a massive eruption would sweep down the northeast and southwest slopes to engulf the Higashi-Fujigoko Road, which under current plans would serve as a key evacuation route. This calls for a drastic rethink and alternative countermeasures, experts say.

While lava flows generally cascade down volcanic slopes at a sedate 10 kph or less, pyroclastic flows of super-heated volcanic ash, rock, air and steam crash down like a runaway locomotive at speeds higher than 100 kph.

Findings released in 2018 by Akita University and the University of Tokyo also drew considerable attention after layers of volcanic ash from an eruption of Mount Fuji around 2,500 years ago were found at the bottom of Lake Motosuko during a geological survey also involving the Mount Fuji Research Institute.

The discovery indicated that the mountain erupted on two occasions at an interval of 20 years. The two volcanic events from 2,500 years ago have yet to be included in a list of 180 known eruptions over the past 5,600 years. The information is being used for a new hazard map.

Other research turned up further evidence of the already known two eruptions of 3,000 years ago and another that occurred 2,300 years ago. It was the first time that ash layers from those eruptions have been found in Motosuko to the windward side of Mount Fuji.

Even in the case of a small-scale eruption, craters near downtown regions could still have a significant impact on the lives of local residents.

“Just 0.5-millimeter of ashfall on rail tracks would make it impossible for trains to operate,” said Toshitsugu Fujii, director of the Mount Fuji Research Institute.

According to Fujii, 73, an ash layer of 10 centimeters on streets would render them impassable for people riding bicycles, scooters and motorbikes. If combined with rainfall, squidgy ash of just 3 cm would be enough to stop automobiles.

Yoshimoto, the institute’s senior researcher, said he gets children who visit the research center to mark their homes on a model of the area around Mount Fuji with clay markers and then pours liquid to simulate lava flows and how they could reach their homes from different craters.

“Craters could arise anywhere on Mount Fuji,” Yoshimoto said. “Combining data on crater locations and wind direction with the hazard map will make it possible to presuppose how lava and pyroclastic flows as well as ash move. What is significant about living in areas at the base of Mount Fuji is figuring out the distances from craters.”