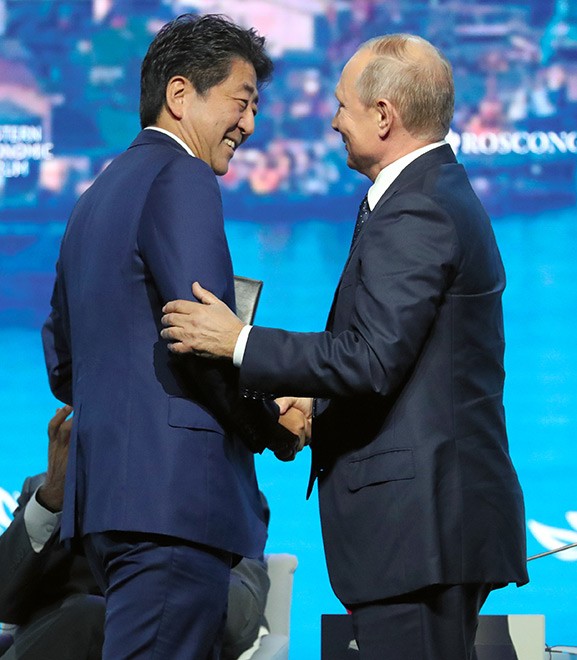 Abe had initially planned to attend the ceremony in the hope of holding talks with Russian President Vladimir Putin to advance stalled peace treaty negotiations with Russia over the disputed Northern Territories.

However, the two countries are unable to schedule bilateral summit meetings because of the COVID-19 crisis, making the prospect for progress in peace treaty talks unclear, the sources said.

Abe planned to visit Russia in May as he was invited to the ceremony originally scheduled for May 9. But the event was postponed because of the coronavirus outbreak both in and outside Russia. Putin announced the rescheduled ceremony will be held on June 24.

Senior Foreign Ministry officials said the Japanese government confirmed that the Russian side plans to limit the number of world leaders it invites, except those from the countries that were part of the Soviet Union.

“Abe will not visit Russia to attend the ceremony,” said an Abe administration official. “His plans to go are fading, and with it the attention (the visit would have generated).”

“We place importance on inviting (leaders from) the countries of the former Soviet Union,” Putin’s spokesman, Dmitry Peskov, said June 4.

The Japanese government's long-standing quest was to regain sovereignty of four islands off the coast of the main northern island of Hokkaido that were seized by Soviet forces at the close of World War II. But it changed its stance on the issue by effectively seeking the return of just the Habomai islets and Shikotan, instead of all four islands, in an attempt to break the deadlock over the issue.

A peace treaty formally ending hostilities emanating from the war is considered a crucial first step to regaining control of the islands.

Abe and Putin agreed at a November 2018 meeting to accelerate peace treaty talks based on the 1956 Joint Declaration between Japan and the Soviet Union that stated the Habomai islets and Shikotan would be handed over to Japan after a peace treaty was concluded.

Abe aimed to reach a broad agreement in June 2019, but was unable to clinch one.

Takeo Mori, a senior deputy foreign minister, and Igor Morgulov, his Russian counterpart, talked over the phone on June 4 to discuss pending issues, including peace treaty talks. It was the first vice ministerial-level exchange held in seven months.

Although talks resumed at the working level, Abe’s term as president of his ruling Liberal Democratic Party expires in September 2021, leaving little room for him to achieve his longtime goal of resolving the thorny territorial issue.

(This article was written by Tatsuya Sato and Yuki Nikaido in Tokyo and Ryosuke Ishibashi in Moscow.)