Rare deep-sea unicornfish pops up in fishing net off Imizu

video: Tomoharu Kimura, a breeder and researcher at the Uozu Aquarium in Uozu, Toyama Prefecture, talks about the North Pacific crestfish. (Video by Mamoru Takatsu with footage provided by Shintoku Gyogyo's Taku Suganuma) 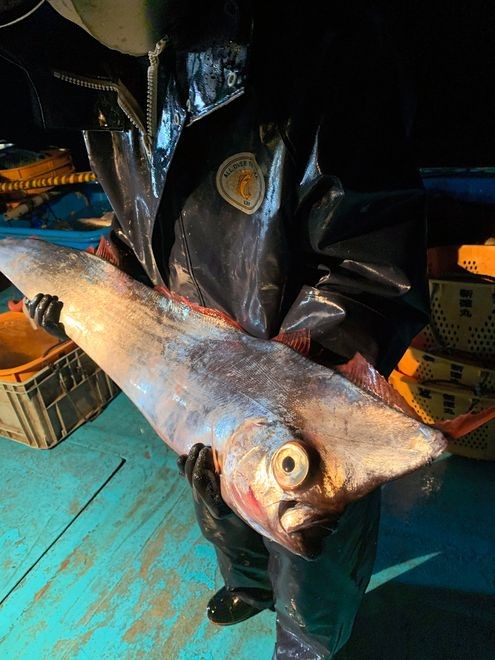 A North Pacific crestfish hauled onto a fishing boat in Toyama Bay off the coast of Imizu, Toyama Prefecture, on May 15 (Provided by Taku Suganuma)

UOZU, Toyama Prefecture--When Taku Suganuma hauled up his fixed fishing net off the coast of Imizu, he made a catch of the day that he had never seen before.

The strange fish had a unique face with a protruding head, rippling its dorsal fin and shaking its 1-meter-long silver body.

Suganuma, 24, caught the fish on the Shintokumaru fishing boat, which sails out of Imizu, in the early hours of May 15, when the firefly squid fishing season was coming to an end.

At first, he thought it was a lowsail ribbonfish, which is often caught in nets during this season. However, a younger colleague knowledgeable about fish species said it might be a deep-sea North Pacific crestfish, aka unicornfish.

Suganuma decided to give the fish to the Uozu Aquarium because of its rarity.

According to records kept by the aquarium, a North Pacific crestfish hadn't been spotted in Toyama Prefecture for more than 30 years since one was found washed up at the mouth of the Katakaigawa river in Uozu in 1988. However, eight of the unicornfish either were caught or were snared in nets between February and April last year.

The North Pacific crestfish is characterized by a red dorsal fin and releases black ink from its anus in response when it senses danger.

It is believed that the fish lives in the intermediate layer at depths between 200 and 1,000 meters offshore, but details about its life remain unknown because it is rarely caught.

Specimens usually quickly die due to differences in the water temperature and other factors when brought to the surface. Only one of the eight fish taken to the aquarium remained alive for about an hour.

It released a large amount of ink several times as it swam around in a large tank containing 16 tons of seawater, instantly limiting visibility to only 10 centimeters ahead.

Tomoharu Kimura, a breeder and researcher at the aquarium, said that the white flesh of the fish is crunchy like flounder when served as sashimi, while it tastes bland and plain.

A close look at the contents of its stomach provided hints of the North Pacific crestfish's life and ecosystem, as well as a threat to marine life: plastic waste.

As to why they were caught in Toyama Bay, Kimura said: "In Toyama Bay, where the water suddenly deepens from the shore, fish that live in the intermediate layer could wander into fixed nets."

Yoshihiro Fujiwara, a senior researcher at the Japan Agency for Marine-Earth Science and Technology (JAMSTEC) who is an expert in marine biology, said, "Because they have poor swimming capabilities, they seem unable to return to deep water once they are carried by the current that flows to the surface."

Many deep-sea creatures stay still and wait for prey to conserve their energy, he added.

There are also discoveries that emerged after the North Pacific crestfish was caught in May. Packaging film for medicines and video cassettes were found in its stomach, along squid and Japanese anchovies.

It is thought that the fish mistakenly consumed such waste items because it uses its big eyes to find food, not through its feelers or sense of smell.

It is said that modern research into the deep sea started in 1872 with the expedition of the HMS Challenger.

Although there have been a wide variety of findings since then, "At least 90 percent of the deep seas surrounding Japan have never been explored by anyone," Fujiwara said.

But because they remain a mystery, it is even more surprising when details about creatures living in the dark environment come to light.

It has been learned that there are life forms in the deep sea where light is absent that use chemical substances streaming from the Earth's surface as energy sources.

Other mysterious creatures include predatory tunicates, which remain still and patiently wait for their food to drift toward them, and "honekui-hanamushi," a type of tube worm that takes root in the bones of dead whales on the seabed to absorb organic matter.

The Atlantic footballfish has a "fishing rod" on the top of its head. Although the male is so tiny that it appears to be a lump on the body of a female, he bites into her skin and connects its blood vessels to those of the female to live on nourishment from her.

"We learn more and more about how artful creatures can be to survive and how cleverly they have evolved. That's the charm of the deep sea," Fujiwara said.

(This article was written by Mamoru Takatsu and Natsuki Edogawa.)