Ex-abductee mourns death of Yokota, who ‘saved’ her life 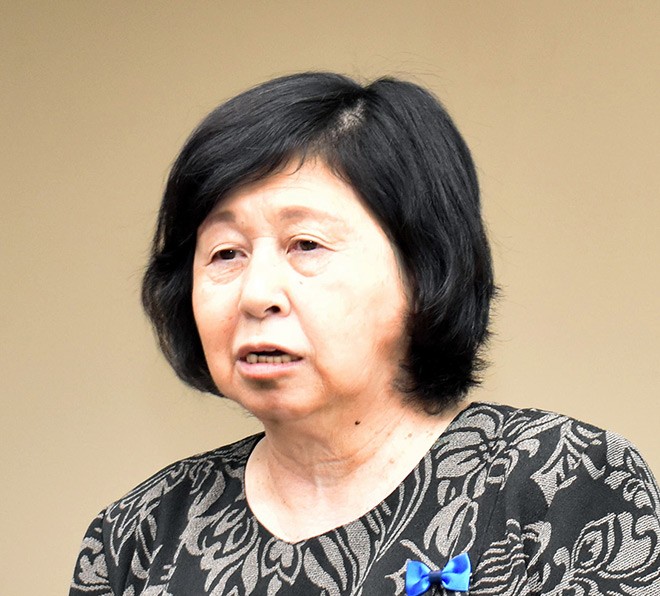 Hitomi Soga, who returned to Japan in 2002 after she was abducted by North Korea in 1978, talks about memories of Shigeru Yokota at a news conference in Sado, Niigata Prefecture, on June 6. (Yo Konishi)

SADO, Niigata Prefecture--Former North Korean abductee Hitomi Soga expressed sadness and regret after hearing about the death of Shigeru Yokota, a leader in an effort to repatriate Japanese abductees, who she credits with saving her life.

Soga, 61, who returned to Japan in 2002, told Yokota about her interactions with his daughter Megumi, who was abducted by North Korea in 1977 and never has returned home.

“I wish I could have gotten him reunited with Megumi so that the two could have talked a lot,” Soga said at a news conference here.

Yokota, 87, died of natural causes in Kawasaki, Kanagawa Prefecture, on June 5. He headed the Association of the Families of Victims Kidnapped by North Korea after its establishment in 1997.

Since then, he and his wife, Sakie, had spearheaded the campaign to bring back Megumi, who was 13 at the time of her disappearance, and other Japanese abductees.

But despite his tireless efforts over the decades, Yokota could not see his daughter again.

“Frustration, sadness and heartache … my mind has been full of thoughts,” Soga said, describing her feelings when she learned of his death.

In a letter addressed to Yokota, she expressed her deep gratitude to him.

“You saved my life,” she said. “I cannot thank you enough.”

Soga pledged to continue her activities for the return of abductees and work harder toward the resolution of the abduction issue to make up for the loss of Yokota, who has been a symbolic figure in the campaign.

Soga was abducted on a street near the coast of what is now Sado on the island of Sado along with her mother, Miyoshi, 46, in August 1978. They were on their way home from shopping. The whereabouts of her mother remains unknown.

At the news conference, Soga disclosed that when she lived with Megumi temporarily in North Korea, the girl described her father as “very gentle” and “having a nice smile.”

After Soga’s return to Japan, she said Yokota talked to her to ask what she could tell him about his daughter.

“Thank you for being with Megumi,” Soga quoted him as saying to her. “Please share with me anything you remember about her."

Toru Hasuike, who formerly headed the secretariat of the Association of the Families of Victims Kidnapped by North Korea, expressed frustration on Twitter that no breakthrough has been made on the abduction issue.

“Right now, Japanese society cannot afford to grapple with the issue due to the new coronavirus pandemic,” he said. “I wonder if the government is not going to take any action about the question until the pandemic is brought under control. Yokota must have been extremely anxious.”

(This article was written by Yo Konishi and Takuro Negishi.)