After jobs vanish, 343 Vietnamese board special flight for home

Vietnamese students, interns and others leave Japan on June 5 for their home country on a special flight arranged by the Vietnamese Embassy. (The Asahi Shimbun) 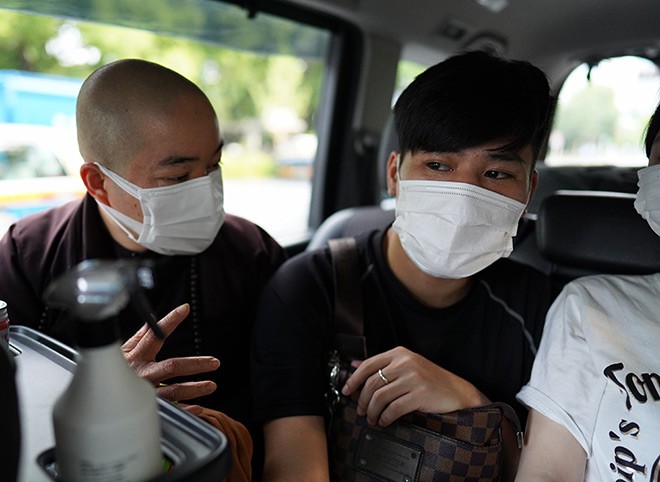 Hoang Van Hoach, center, rides in a vehicle in Tokyo’s Minato Ward to catch a flight back to Vietnam on June 5. On the left is Thich Tam Tri, a monk who supports Vietnamese. (Hikaru Uchida)

Unable to afford a bullet train ticket from Fukuoka, Hoang Van Hoach found himself riding local trains for two weeks to reach Tokyo where he could seek help at the Vietnamese Embassy.

The 26-year-old man who hoped to attend a vocational school in Japan is one of many Vietnamese who had their dreams dashed during the COVID-19 pandemic.

“I believe that I could have landed a job with a decent company after studying at a vocational school if the pandemic had not hit,” he said.

Hoach had only 11,000 yen ($101) to his name when he left Fukuoka. On his way to the capital, he washed his body at a restroom in a park. He slept at train stations or underneath the elevated railway tracks on many nights.

Hoach is among the 343 Vietnamese who flew out of Narita Airport to return home on June 5. The special flight was arranged by the Vietnamese Embassy in Tokyo for compatriots whose livelihoods in Japan were significantly impacted by the new coronavirus pandemic.

The first such flight was flown in March.

Vietnam Airlines has suspended regular flights between Japan and Vietnam until the end of this month.

Of the 343 passengers, about 130 were information technology engineers. The rest experienced enormous financial difficulties in getting by in Japan after the health crisis unfolded.

Hoach had attended a Japanese language school for two years in Fukuoka until the end of February.

While attending the school, he also worked for a bento lunch box factory on an hourly wage of 900 yen, which allowed him to earn 90,000 yen a month.

But with the COVID-19 crisis, his part-time job was gone after many businesses in Fukuoka shut down at the request of the authorities. To add to his woes, he was asked to move out of a school dorm after graduating from the school.

He turned to his friends for help. They let him stay with them, but he did not want to overstay his welcome.

Hoach planned to go on to an automobile-related vocational school in Japan to acquire skills after finishing the language school.

But he faced bleak prospects for coming up with the approximately 1 million yen for the tuition and fees as the Japanese economy quickly soured.

When Hoach talked with his mother back home, she told him to return to Vietnam by seeking assistance from embassy staff.

After growing up in an impoverished family, Hoach came to Japan in hopes of making his parents’ life easier.

Despite that desire, he found himself with no choice but to turn to his mother to pay for an airline ticket of about 90,000 yen. He also needs to repay about 1 million yen in loans for the money he borrowed for coming to Japan.

Also aboard the special flight to Vietnam were pregnant women, including Pham Thu Thanh, 23, a former technical intern trainee.

After arriving in Japan in late 2018, Thanh worked for her employer in Nagasaki Prefecture, packing eggs in boxes and making 80,000 yen a month. Keeping only 20,000 yen for herself, she sent the rest of her paycheck to her family each month.

But she left the employer without notice about a year ago as she figured that with that monthly income, she would not be able to repay the money she borrowed to come to Japan.

She traveled to Gunma Prefecture where her Vietnamese friend lived. But she could not find a job there and had to ask her family in Vietnam to send her money to live on.

Thanh learned in November that she was pregnant with the child of a Vietnamese man she lived with.

The child is due in August. But the woman plans to give birth at a temple as she does not want her parents to know about her pregnancy.

“I wish I could work in Japan,” she said.

Also on the flight were urns containing ashes for six Vietnamese individuals, including a woman who was killed in a traffic accident after working as a technical intern trainee and a student who committed suicide.

Thich Tam Tri, a 42-year-old Vietnamese monk at Nichietsu Tomoiki Shienkai, a nonprofit aimed at supporting Vietnamese in Japan, said, “We want to return the ashes of fellow Vietnamese to their relatives as soon as possible.”

As of late 2019, about 410,000 Vietnamese lived in Japan, many of them technical intern trainees and students.

But the coronavirus health crisis took a severe economic toll on those Vietnamese as their jobs were quickly wiped out.

According to the Vietnamese Embassy, more than 10,000 Vietnamese have expressed their intention to return to their home country.