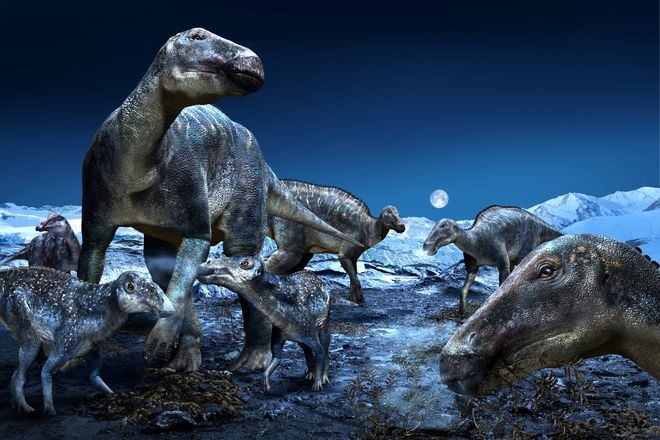 A study on fossils found in Alaska supports the theory that a plant-eating dinosaur species in Hokkaido came from North America, scientists said.

The Hokkaido species, given the scientific name of Kamuysaurus japonicus last year, is a close relative of Edmontosaurus, a herbivorous hadrosaurid dinosaur from the Cretaceous Period, according to a research team that included scientists from the Okayama University of Science and Hokkaido University.

It had been thought that Edmontosaurus lived between about 40 and 53 degrees north latitude from the U.S. state of Colorado to the Canadian province of Alberta.

However, many hadrosaur fossils have been found in a stratum near a latitude of 70 degrees north in Alaska.
Scientists have debated over whether the fossils were of Edmontosaurus or another species called Ugrunaaluk. But the answer remained unclear because the fossils of adult dinosaurs have hardly been found there.

Ryuji Takasaki, a researcher at the Okayama University of Science, Hokkaido University professor Yoshitsugu Kobayashi and other scientists studied the Alaska fossils in detail.

They said the fossils were from Edmontosaurus because characteristics considered unique to another dinosaur could be from changes accompanying growth, among other reasons.

If their theory proves correct, Edmontosaurus had a geographical distribution spanning about 4,000 kilometers from north to south in North America.

“It seems that Edmontosaurus lived in inland and coastal regions from north to south, and had wide-ranging capacities to adapt to the environment,” Takasaki said.

Kobayashi, who has been leading research into Kamuysaurus, added, “It is possible that the ancestor of Kamuysaurus that adapted to the environment at the northern limit of the species’ habitat crossed from North America to Asia and eventually evolved to Kamuysaurus.”

The first fossil of Kumuysaurus was discovered in Mukawa, Hokkaido, in 2003. Researchers estimated the dinosaur was an adult at least 9 years old, 8 meters long and weighed between 4 and 5.3 tons.

The latest research was published in the science journal Pros One at: (https://journals.plos.org/plosone/article?id=10.1371/journal.pone.0232410).