Researchers use the supercomputer Fugaku to simulate the effectiveness of a partition for preventing droplets from coughing from spreading in a typical office setting. (Provided by Riken Center for Computational Science and Toyohashi University of Technology. Supported by Kyoto Institute of Technology and Osaka University) 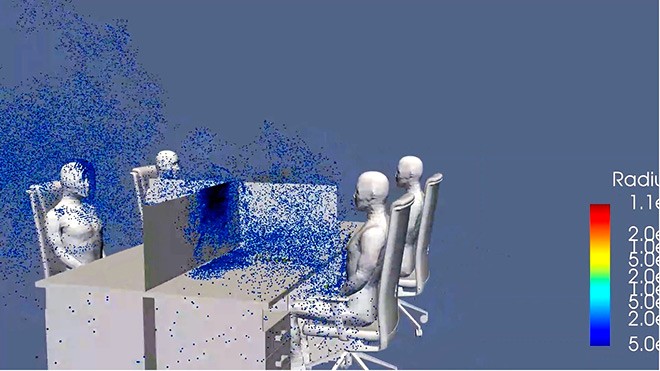 A simulated image by a supercomputer Fugaku, in which a person at right front coughs and droplets reach others when the height of a partition is 120 centimeters. (Provided by Riken Center for Computational Science and Toyohashi University of Technology. Supported by Kyoto Institute of Technology and Osaka University)

Using a supercomputer simulation, researchers have successfully modeled the proper partition height needed to minimize the risk of spreading the novel coronavirus from a cough.

Setting up partitions between seats in offices and restaurants will effectively prevent microscopic droplets from spreading if a partition board is at the height of a person’s face, according to the recent analysis.

The result was released by a team of researchers from the Riken Center for Computational Science and others on June 3.

Makoto Tsubokura, a leader of the research team, pointed out that in many cases, partitions in offices are set up low enough for employees to be able to see each other’s eyes.

But when one coughs, droplets of less than 10 micrometers are released into the air and circulate around the partition and reach other people, Tsubokura said.

“To prevent the virus from spreading effectively, (partitions) need to be as high as people’s heads,” he said.

The researchers used the supercomputer Fugaku, a successor to the K computer that once ranked first in the world in computing, for a simulation.

In a typical office setting where four workers sit at a desk across from each other, researchers simulated how droplets spread depending on the height of a partition when one of the workers coughs.

In a closed and non-airconditioned environment where droplets are least likely to spread, researchers set a condition that coughing hard twice releases about 50,000 particles of a size from 1 micrometer to several hundred micrometers of a micrometer into the air.

When there was no partition, comparatively large droplets fell near the person who coughed.

But smaller droplets never hit the ground. Instead, they flew toward the person sitting across from the cougher and even spread to the other two people who sat diagonally in front of and next to the cougher.

When there was a 120-centimeter high partition, about the same height of the mouth of a seated person, many of the smaller droplets passed over the partition and spread.

When there was a 140-cm high partition, droplets rarely reached the other people.