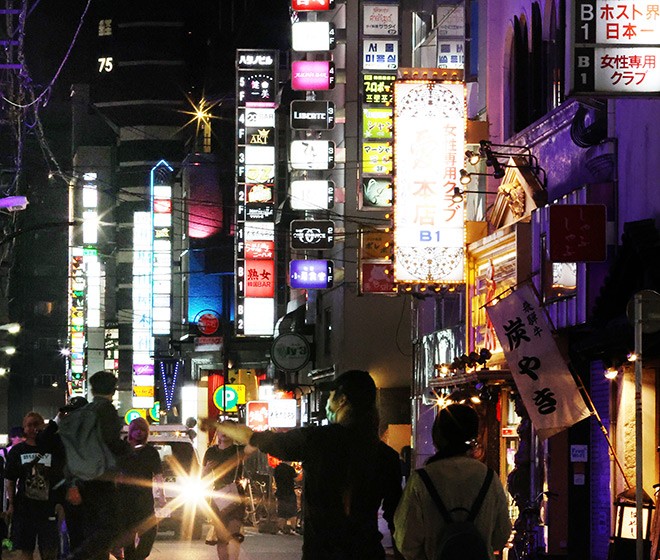 A man who works as a host in Tokyo’s Kabukicho entertainment district said he took precautions against novel coronavirus infections, but he was forced to regularly enter a high-risk area: his workplace.

He told The Asahi Shimbun that he and other employees were ordered to continue working at the club during the pandemic, despite knowing the dangers. He said he suspected other workers had become infected, but the club disclosed no information to the staff or the public.

“The virus spread has gotten a lot of media coverage, but many of us working in so-called ‘red-light’ districts are treating it as somebody else’s problem,” the now-infected host in his 20s said over the phone while in quarantine.

Entertainment districts in Tokyo are considered potential sites for cluster infections that could lead to a new wave of COVID-19. But many businesses there and their workers are under financial pressure to continue operating.

Like many other host clubs and “cabaret” clubs in Kabukicho, the host’s workplace temporarily shut down in early April, when the central government issued a state of emergency over the novel coronavirus outbreak.

After about two weeks, the club reopened in mid-April.

The host said he realized that something was wrong in May.

One staff member developed a fever higher than 37.5 degrees for more than a week and missed work. The worker returned to the club without taking a polymerase chain reaction (PCR) test for COVID-19.

Soon, the host had a fever of 38.5 degrees. He took the PCR test and was confirmed infected with the new coronavirus.

Although he felt nervous about being infected, the test result came as no surprise to him.

He said he had followed the government’s “stay home” requests as much as possible, and ventured outdoors mainly just to go to and from the host club.

In his heart, he did not want to go to his job, but his boss told him, “You will be fined if you miss work, unless you are very sick.”

The host recalled, “I had no choice but to go to work.”

Since early June, he has stayed at a hotel in Tokyo arranged exclusively for COVID-19 patients with mild or no symptoms.

Some of his clients and co-workers tested positive for the virus, but his employer has not fully disclosed the health situation at the club.

The host said that he and seven others have missed work.

The club has remained open, and other hosts there have kept working like nothing has happened, he said.

He said the club has taken some measures to prevent the spread of the virus, such as having staff check their body temperatures and use sanitizer upon entering.

But the club often gets busy and crowded.

For hosts who do not make much money, the high risk of infection does not end after their shifts. They live in a club-arranged dormitory, where they share rooms and sleep on bunk beds.

The host told The Asahi Shimbun that he once asked the club owner to provide days off for infected workers and those who had come in close contact with them.

But the owner said: “They are fine. I think it’s all right.”

He was not convinced by the owner’s comment, but he understood why such words were said.

“Some staff members are short of cash, and the club needs sales to stay in business,” he said. “But their health protocols and preventive measures are far from sufficient. I was infected because of that.”

He believes that his club is not alone.

“I think there are clubs that open for business without disclosing to the public that their workers have been infected. The infection is spreading far more than (we) think,” he said.

The state of emergency over the COVID-19 pandemic was lifted on May 26 in Tokyo, and the capital has since started to lift restrictions on businesses and other operations.

Although Tokyo Governor Yuriko Koike continues to urge the public to avoid nightlife districts, those areas are responsible for a notable percentage of the new daily cases of COVID-19.

Of the 237 newly infected people in the two weeks until June 8, 34 percent, or 80, were connected to such entertainment districts.

About half of the cases were traced to Shinjuku Ward, where Kabukicho is located.

On June 6, 12 hosts working at the same club in Shinjuku were confirmed infected with the virus.

In the week from June 2 to 8, 22 host club employees tested positive for the virus, according to Tokyo officials.

(This article was written by Kae Kawashima and Yusuke Nagano.)